My wife’s birthday is almost here and after having a look online for ideas I had been reminded of an old saying, ‘it is the thought that counts’. One Reddit user set an example when publishing some photos earlier this month, which reveals 8 months of work to create a Fallout 3 and New Vegas-inspired Monopoly board.

The image above and below reveal how smart his creation is, which had been for his wife’s birthday and of course she’s a big Fallout fan. You can see a collection of photos on this page that feature all the parts used to create the Fallout Monopoly board and reveal some of the New Vegas-inspired twists used during gameplay. 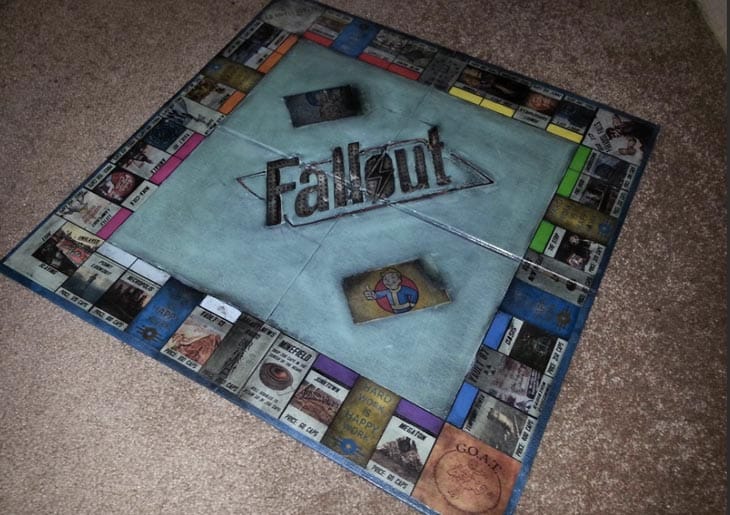 The Reddit user explained they included different playing strategies and new Fallout rules, which include perks, items and attacks.

Fallout: The Board Game After the Apocalypse – this of course isn’t the first time a Monopoly board has been created in the theme of Fallout, and those of our readers that follow the majority of Fallout news will remember another custom board game from a couple of years ago. One photo of that creation can be seen below, which this time had been created as a gift for a boyfriend.

If you want to see more photos of this Fallout Monopoly board then head over to this page. We’d also love to know what you think about both board games and if you’ve ever created a custom game like this?

Do you have the best memories from Fallout: New Vegas, or did Fallout 3 deliver more for you? Those of you keeping up with Fallout 4 news and ideas for the next game might want to see our opinionated article on mods vs. official features and how most gamers want Fallout 4 to stay bloody and violent.