We now have the date that all Xbox One owners have been waiting for, the final Fallout 4 Xbox One release date for when you can finally get your hands on mods that will change the future of the game forever.

Bethesda wasn’t joking when they said they were planning for full support. Tuesday May 31 is the date when mods will be available and you’ll be able to choose from over 800 mods which is amazing.

As for information on what time you can actually download Fallout 4 mods on Xbox One in the US and UK, we can confirm that this won’t be happening at midnight in your area. 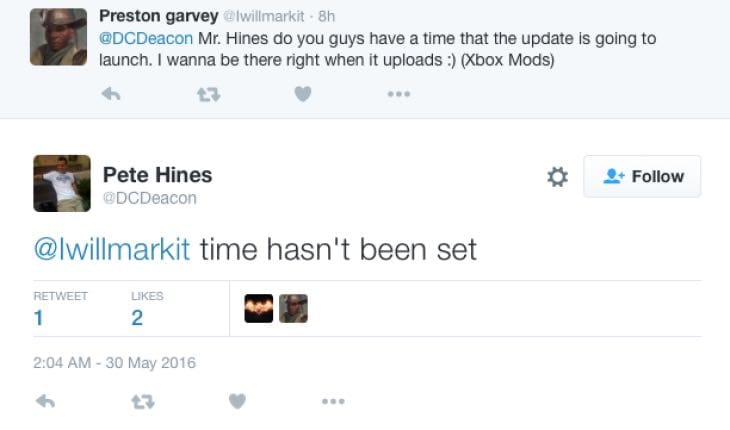 Bethesda’s Pete Hines has revealed on Twitter that a release time for mods on Xbox One has ‘not been set’ yet, meaning that will probably go live Tuesday daytime rather than an release through the early hours after midnight.

If anything changes we’ll update this article with more details but as things stand we have a feeling that it is not worth staying up through to the night to get those mods on Xbox One.

As we wait for the Xbox One mods download time to go live, you can visit the Fallout 4 mod hub here and decide which one you want to download first – there will be a 2GB download limit for everyone!

Discuss the mods release time in the comments below and tell us which mods you will grab first!