Fallout 4 fans are patiently waiting to find out what time the Fallout 4 Wasteland Workshop DLC is out on PS4, Xbox One and PC.

Most of you will be probably already aware, that so far Bethesda hasn’t gone public yet on the exact time the Wasteland Workshop download is live on Tuesday April 12.

We’ve done some digging on this though and found this reply from Pete Hines to a user in relation to the second content pack. 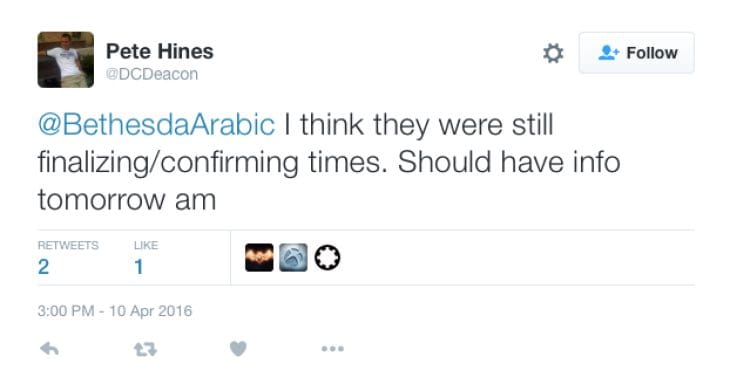 As you can see, Bethesda are expected to reveal the release time on Monday morning US time, so we should find out some more information in the coming hours on when you can download the next DLC.

Obviously it’s not a lot to go on right now, but at least it keeps you updated with the release. Are you excited about the Wasteland Workshop tools for your settlement?

It’s the content that will bridge the gap before the Far Harbor DLC for Fallout 4 is out in May, that one apparently being bigger in size than the massive Shivering Isles expansion pack for Elder Scrolls 4 Oblivion.

Leave your last minute expectations on the Wasteland Workshop content below and we’ll update this article when we have an exact time for you – let us know the timezone you are after.

Update: Readers reporting that they have the DLC already in Australia! Anyone else got it yet?