With the news on the first Fallout 4 beta patch going live, we wanted to give a quick reminder to console players that the Fallout 4 PS4 and Xbox One updates should now be out sooner rather than later.

To recap, Bethesda has issued some general memory and stability improvements with the moment. They’ve also fixed some specific issues with certain quests and introduced new features relating to remapping keys.

We expect Bethesda to issue a similar update for console users with Fallout 4 update 1.02 (assuming that’s next), but obviously with specific tweaks to PS4 and Xbox One if there are issues that are not present in the PC version. 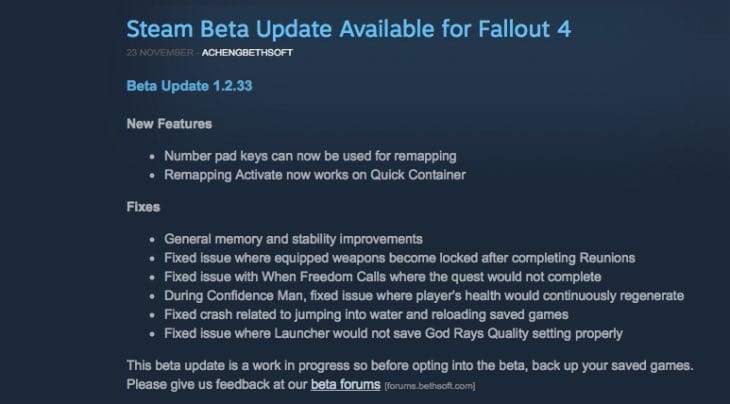 Remember that Bethesda stated here on their website, that the full PC release will be next up and then after that console patches will be released.

Also, Bethesda will deploy frequent ‘smaller’ patches this time around, as opposed to larger updates every so often – this is a nice schedule which gamers should be happy about.

As we approach the first Fallout 4 update on PS4 and Xbox One, let us know what changes you need to see, based on your experiences with the game so far.

List your fixes that Bethesda needs to implement for the game to make your own experience better moving forward.