We have some fantastic news for console owners now. We already know that the Fallout 4 PS4 and Xbox One release date has been confirmed for early November, but now we have some great news for you to take into account with regards to post-release Fallout 4 DLC.

We now live in a world where the majority of big game releases are controlled by DLC agreements. In other words, behind the scenes wars between Sony and Microsoft on who can pay the most money to a publisher to secure early DLC for their platform – which in turn usually results in more sales for either company.

Now, we are happy to say that there will not be any such DLC agreements for Fallout 4. Pete Hines has just revealed on Twitter that Fallout 4 DLC expansions for the game are going to be coming out at the same time for everyone. 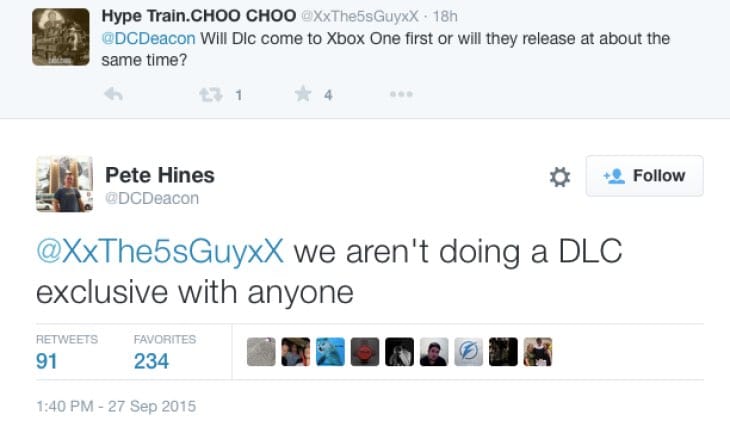 It’s worth pointing out that this doesn’t apply to the Fallout 4 Creation Kit, which has already been confirmed to be coming out on Xbox One first as part of an early agreement with Microsoft.

Xbox One owners are also going to be receiving a copy of Fallout 3 too which doesn’t apply to the PS4 version, but it’s nice to see that this won’t affect the major DLC for the game.

We know many of you will be delighted by this as some of you still can’t understand why these DLC agreements exist in the first place.

There is going to be a big divide over the Black Ops 3 player base due to the exclusive deal that Sony landed for DLC this year.

What is your reaction to the fact that Bethesda are staying neutral for Fallout 4 DLC – which version are you buying – PS4, Xbox One or PC?