As we told you hours ago, we are now just weeks away from Fallout 4 mods on PS4 finally coming out. To keep you busy while you wait, you’ll be pleased to hear that the developers have now updated the list of Fallout 4 PS4 mods on Bethesda.net which are officially supported.

Remember that for PS4 users, Fallout 4 mods will have to be created using in-game assets so there has been a lot of fear from the community that some modders won’t want to go to extra lengths to get their mods accepted on PS4 with the restrictions – knowing too well that the same mod without restrictions would work on Xbox One with no problems.

At the time of writing though, it is looking good for PS4 users. There are currently 835 mods on PS4, which is a decent number but still well below the 1200+ available on the Xbox One version. 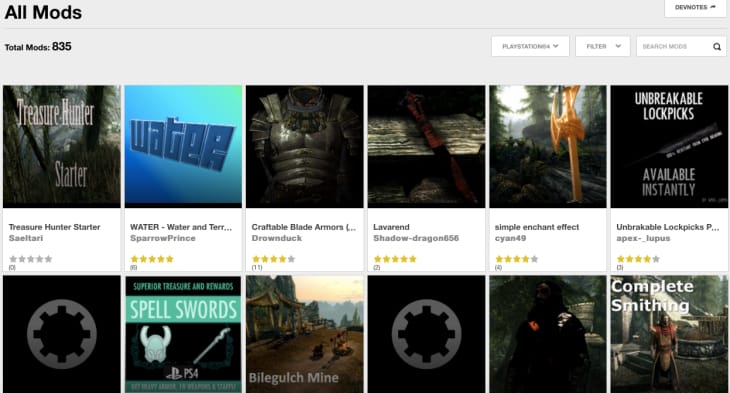 Some of the mods that we spotted which are available and waiting for PS4 users are Craftable Blade Armors by Drownduck, Complete Smithing by ThordTV and a PS4 version of the very handy Hearthfire Display Case Fix by Krucify, ported by nekollx.

There’s something for everyone here and we think you will be satisfied with the growing list – remember that modders are making more custom files available as we speak, so it could well reach over 1,000 by the time Fallout 4 update 1.11 is live.

Are you impressed with the list on PS4 so far, given the restrictions in place? Let us know what other kinds of mods you hope to see added in time for November’s launch?