We have some bombshell Fallout 4 news to bring you, but it’s not good. It’s been confirmed by Bethesda that Fallout 4 mods on PS4 are not coming, with the developer pointing the blame directly at Sony.

Fallout 4 mods have been available on console since May on Xbox, but PS4 users have endured a frustrating wait with little to no information whatsoever on what really is going on behind the scenes.

Well now we know. Just take a look at the full explanation on why PS4 users can’t enjoy a major feature of Fallout 4 like millions of Xbox gamers. 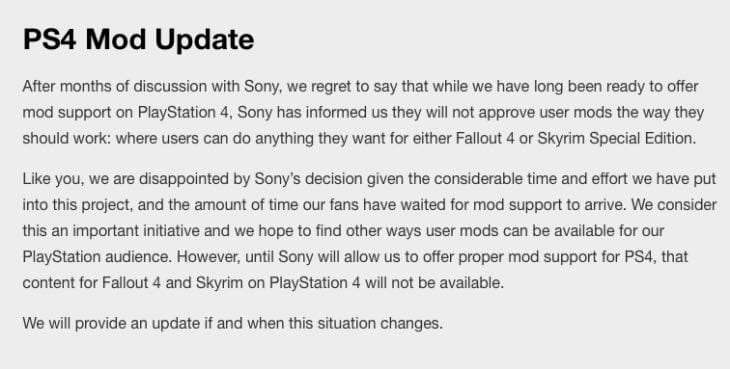 If that wasn’t bad enough, Bethesda has said that mods are not coming to Skyrim Special Edition either which is a deal breaker. Having mods for Skyrim on PS4 was the core reason for most why they would play the game again and now that it isn’t happening, well prepare for the refund floodgates to open.

Microsoft, inevitably has sensed a wounded beast and have gone in straight for the kill. Here’s the Tweet from Major Nelson and the Xbox channel moments after Bethesda’s bombshell.

ICYMI: Xbox One owners have been enjoying @Fallout 4 mods since May. Details https://t.co/6p7DAqjIhf pic.twitter.com/ktCYIhIFkx

Sony surely needs to come out and explain the situation as it just looks terrible on their part right now. How can they block this feature from coming out when it is available on Xbox?

Are you in a state of disbelief now that you know mods are not coming? Is this going to change your mind about buying PS4 Pro if Sony’s policies on user mods will always be the same?