We have some more details on the status of console mods for Fallout 4 on PS4 and Xbox One. We know that some of you are worried about the exact process that will go into making mods available on console and now it looks like Bethesda are aiming to allow ANY mod to be playable on PS4 and Xbox One.

To recap, Xbox One owners will be getting mods first as part of the deal struck between Microsoft and Bethesda at E3.

Recently, PS4 was also confirmed to be getting these mods but at a later stage in 2016. Now, some comments left on the personal account of Bethesda’s Pete Hines seems to suggest that the Fallout 4 team are taking an open view, as to what kinds of mods they will allow console users to play. 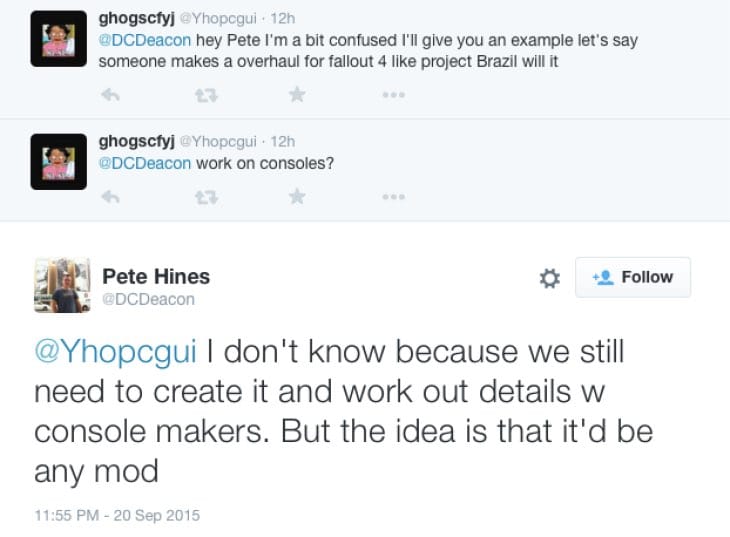 As you can see from the exchange on Twitter, Pete Hines has said that any mod created needs to be ‘worked out’ with Sony or Microsoft before it goes onto PS4 or Xbox One.

After all, Sony are obviously not going to allow a Fallout 4 nude mod for example on their system as that would just create all kinds of problems – and yes, many gamers actively look for these kind of downloads.

Still, Pete Hines has said that they are planning on getting ‘any mod’ to work, so hopefully that’s an indication that mod developers will still have a free rein to work with.

That sounds great to us so if you have played Creation Kit mods before and now plan to play Fallout 4 on console – give us your thoughts on this debate below.