It has been a very long time with complete silence, but finally Bethesda has now spoken out on the status of the missing Fallout 4 DLC release date.

The developer has sent out a Tweet hours ago, saying that gamers will now not have long to wait before Fallout 4 DLC news is announced at last.

You can see what they said below, which also came in conjunction with the announcement of a new Fallout 4 Survival Mode – details on that here if you missed it earlier. 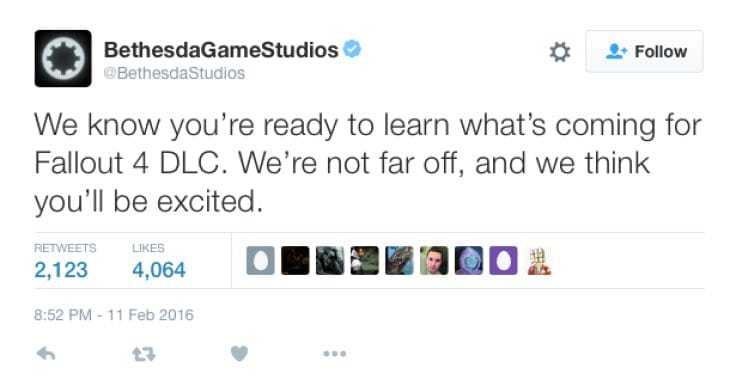 Sadly, there’s no date attached to when the announcement will be, but given that Bethesda are now publicly Tweeting out about DLC it should be very soon.

After all, they are not stupid and know that fans are already frustrated with the ongoing wait so we doubt they’ll keep players waiting much longer.

Right now Twitter is going crazy on what Bethesda could be bringing to the table for the first piece of Fallout 4 DLC. Tell us what you want to see the most in the comments – more quests, settlement fixes, Nick Valentine romance?