We have a reminder for gamers now that we should be getting the Fallout 4 1.3 update for PS4 and Xbox One today, sometime on February 5, 2016.

Bethesda has already released this update on PC and said that they were ‘expecting’ it to go live later this week on consoles. It is now the end of the week and given that it would be very unusual to release a big patch over the weekend – Friday should be the day when you get the new update.

It is highly anticipated too, as it could bring key fixes for quests that may have stopped progress for you suddenly. We’re talking about quests such as ‘End of the Line’ which Bethesda includes in the Fallout 4 1.3 update notes which you can check out again in full here. 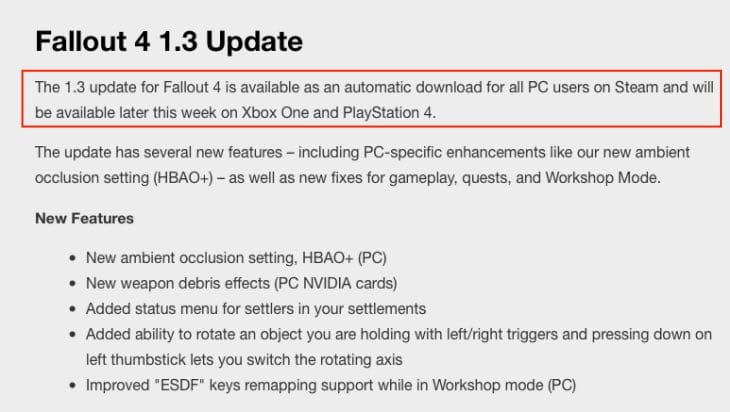 We also noticed that many of the new features introduced in Fallout 4 patch 1.3 were specifically related to PC, so hopefully Bethesda has also lined up some new functionality on console.

We would be very surprised if the Fallout 4 update goes live on Saturday or Sunday, so today should be the day – unless it’s been delayed.

If anything changes to the schedule, we’ll update you here but this is just a heads-up for you which some may appreciate.

Let us know when you see the download live in your area!