Another Fallout 4 beta update has gone live on PC, which is now available to download on Steam. As a result we can now bring you the Fallout 4 1.2.37 PC update notes, which should be added to the collection of fixes which will result in the first Fallout 4 patch update for PS4 and Xbox One users.

Aside from another round of general performance and stability improvements, we can see that Bethesda has also included one specific fix which relates to performance of the game when inside Corvega Assembly Plant.

Bethesda has also offered up additional measures to stop players getting stuck in Terminals on Fallout 4 which should be well appreciated. 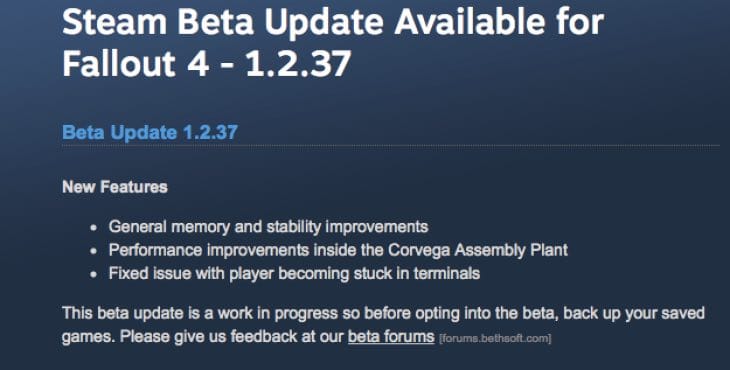 Above is the Fallout 4 1.2.37 beta patch notes as they appear on Steam. It looks like Bethesda are now going to include the two beta patches on PC into one big update on console which is still in progress.

Don’t forget that Bethesda has said that the schedule will be to release the public update first to PC after beta patch rollouts, then get to work on rolling out to PS4 and Xbox One players.

If you are playing on PC, let us know how your game is playing following on from this new update.