We notice that a new Fallout 4 1.05 PS4 update went hours live ago and many of you are still asking what changes are in Fallout 4 1.05 since the update arrived without notice.

We can also confirm that this update is for PS4 specifically, as Bethesda has mentioned that all other versions are ‘up to date’ and that PS4 just needed some fine tuning.

As a result, here is the Fallout 4 1.05 changelog according to the developer – only confirming that Trophy Support has been added for the upcoming Wasteland Workshop DLC, due out April 12. 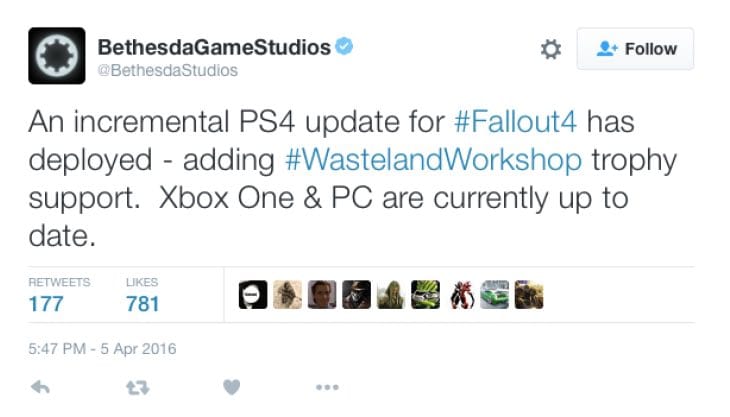 We wish we could bring you more information, but that literally appears to be the only change in the update. There are rumors that the Fallout 4 1.05 PS4 patch notes are also quietly adding support for Survival Mode, but that has yet to be confirmed.

We do know that the Survival Mode beta on PC is now at version 1.5, so we wouldn’t be surprised if Bethesda are getting this ready for consoles too.

Can you confirm that you had a notification to update to Fallout 4 1.05 on PS4 only? Let us know if you have spotted any other changes that we should know about.