With Apple and Android phones updating new features recently has this amounted to a decline in RIM BlackBerry and is it falling behind in apps.

In an article on Mashable, Sarah Kessler reports that it seems to be apps and not Apple are killing Blackberry. With Google initiating a tap and pay system for Android phones at the beginning of the week and Apple announcing free cloud storage and new features for the iOS 5. It looks like RIM Blackberry are falling behind.

There is the feature for limitless instant chat between its customers available with the BlackBerry Messenger, and then you have iMessage from Apple and other group messaging apps. The consensus is that BlackBerry OS market share has been declining in comparison to iOS and Android since June 2010, as shown here on a graph by the Nielsen Company.

The explanation for why the RIM BlackBerry has declined must be more to do with the competition of the app world. With last years market share up compared to Apple and Android, Apple still had up to 20 times the amount of application downloads than RIM Blackberry. This factor is probably coming to effect now, as Blackberry apps are relatively more costly than other counterparts on other devices.

Many App developers are finding that coding for the BlackBerry OS can be a bind, with the API changes and optimized coding between individual major versions of the operating systems. With the diverse specs on Blackberry devices like screen resolution, form factor and GPS, WIFI and the touchscreen making hard work for developers. 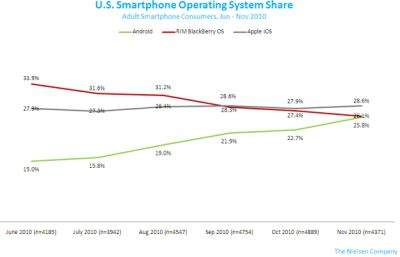 Maybe your applications are now becoming more than just an addition to compliment your device. It seem like they are now making operating systems more effective. For more information on Blackberry falling behind in apps, visit Mashable.com.