With the release of one of the most eagerly awaited games of the year, Call of Duty: Modern Warfare 3, just around the corner it about time the publishers started airing commercials for it. That’s exactly what will be happening exclusively tonight in the UK, during the halftime interval of the England European Championship qualifier match against Montenegro, being aired on Sky Sports 1 and Sky Sports 1 HD.

According to VideoGamer the advert is scheduled for 9pm UK time and for those that aren’t really into football, it can be seen on the internet from then on once it has been aired. It will be a trailer featuring never before seen content, which considering we have seen plenty of MW3 footage online so far, is exciting to know. Pre-orders for the game have already begun and it is due for release across all formats on November 8th.

The marketing campaign is reported to have cost a staggering $200 million this year but the hotly anticipated title is set make profits excessing this as it is tipped by many to be the best-selling game of the year. This year sees it facing some tough competition with the likes of Battlefield 3, which has looked impressive so far, hoping to convert a few of the CoD franchise fans who may be getting bored.

Earlier today we brought you news of a new Sony PlayStation 3, Long Live Play commercial, which features a variety of actors dressed as the iconic characters that have appeared on consoles over the years. These characters include the likes of Solid Snake from Metal Gear Solid, Drake from Uncharted, the Hitman and even Sack Boy to name but a few. Check it out by clicking the link above.

Will you be watching the exclusive MW3 commercial this evening? 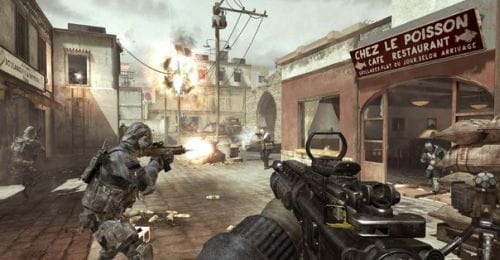