Earlier on we spoke about the new Samsung Galaxy S III briefly when discussing the LG Optimus LTE2, a surprise new handset announced by LG on the same day. Now though, it’s time to focus on Samsung’s new flagship device and how the new hardware specs compare to the some of the best handsets out at the moment.

While some of you may not be too happy with that physical home button that features on the Galaxy S III, you’ll probably be very impressed with the list of hardware specs that Samsung announced. The device will feature a Exynos quad-core processor as expected which is clocked at 1.4Ghz per core, but the most pleasing aspect for us is the inclusion of a 2100mAh battery.

For the very first time, Samsung has announced a phone with a battery good enough to meet the quad-core chip’s expectations and with a 2100mAh battery at your disposal, you’ll be able to manage a good amount of 4G data activity as well as graphic intensive games on the go.

Also impressive on the hardware side is an ‘HD’ Super AMOLED display screen which is a mammoth 4.8-inches in size. This easily eclipses the display screens featured on the Galaxy Nexus (4.65-inch) and the HTC One X (4.7), while at the same time it comes mighty close to the Galaxy Note’s screen at 5.3-inch and even closer to the PS Vita which has a 5-inch OLED screen.

One disappointing aspect which probably needs discussing is the camera. There was growing speculation that the Galaxy S III would feature a 12 megapixel camera, but instead we see that the device has actually been fitted with Samsung’s standard 8MP sensor which is similar to the ones used in the Galaxy S2 and the Galaxy Note. Having said that, most of you will probably be pretty happy with the quality of the 8MP sensor anyway.

Once again though, we have a feeling that it will be the battery life that users will appreciate the most when the device releases in Europe at the end of the month and Summer in the US. The quad-core HTC One X only features a 1800mAh battery which is really not good enough, and some of you aren’t really happy with the Galaxy Nexus battery at 1850mAh either. 2100mAh is a considerable step up for Samsung, so it will be interesting to see just how much extra juice it will be able to manage compared to other devices on the market.

Below is a very useful specs chart, courtesy of Droid-Life which compares Galaxy S3 hardware specs with those in the Galaxy Nexus, Galaxy S2 and probably Samsung’s biggest rival so far, the HTC One X. Are you impressed with what the Galaxy S3 can do on paper initially? 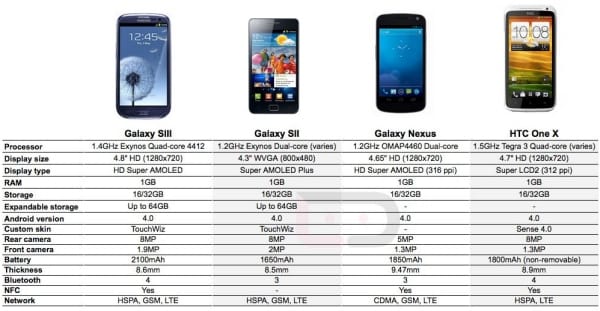