Considering Call of Duty Advanced Warfare will be set well into the future, it is clear that most weapons will evolve and one of our favorite assets in Ghosts were drones. The current game has Strike Packages, also known as Killstreaks, and the drones selectable within these packages included the Vulture and Night Owl.

You gained access to the Vulture at a 9 killstreak if you’re using the Assault Strike Package, which delivers a deployable low flying drone that will protect your six and kill enemies near by. In the Support Strike Package you can choose the Night Owl, which can be deployed after you gain 10 kills that can be accumulated even if you die thanks to the way this package works. The Night Owl drone will follow you around the map and will detect enemies nearby, although the best feature of this drone in our opinion is the way it will both deflect missiles and continue to support your team even if you die.

The drone setup in COD: Ghosts offered an option for those that love to go all out and kill others in multiplayer, and also an option for team players that like to help everyone. There are also other machines that work by your control, and one of these included the Gryphon that can mark a target for detonation. 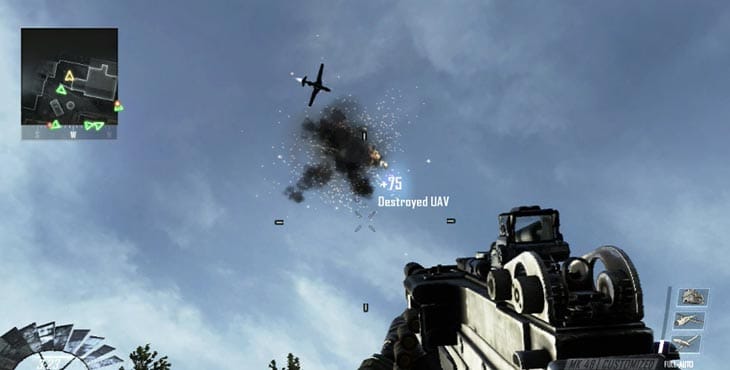 Evolving COD: Advanced Warfare drones – we managed to see a lot of future technology within the COD: Advanced Warfare trailer, but there’s still a lot more to learn about new weapons and these so-called new “highly specialized drones”. It is almost certain that drones will be pimped up a lot in COD: Advanced Warfare, especially considering this game will be set in the future, but how should they evolve? It might be cool to be able to remote control many of the vehicles, although this wouldn’t technically be a drone.

The weapons and abilities of drones in COD: Advanced Warfare will also take a leap into the future with the setting, so seeing a drone with the ability to cloak is possible along with much more powerful weapons onboard.

How would you evolve the drones in Call of Duty: Advanced Warfare? Can you think of any other FPS games set in the future, and ideas that can be borrowed for the next COD?

The ideas can range from crazy, like picking up other players and throwing them or even supporting your team by picking them up, to spy drones that can give you a camera within your visor to see other parts of the map. Share your ideas in the comments, and feel free to really let loose considering this game is 40 years into the future. Other multiplayer changes are being discussed in this article.