If there is one overwhelming topic on social media that has been generated since the launch of Evolve, it is users complaining that the Evolve DLC prices are too expensive.

Once you pick up the game, you’ll soon realise that there are notable number of skins and other add-on content that you can pick up for an added cost. Many players believe that these should have been included in the base game, or at least some of them offered to give players a further incentive to spend more money.

Combining the base price of $60 to the other items that are available for Evolve, gamers have discovered that the price goes up to over $100 if you want everything on day one.

Day one is the key factor for some gamers it seems, as many are unhappy over the fact that there is even day one DLC for Evolve in the first place – under the assumption that if it’s ready for day one, it’s ready to be included in the package for free. 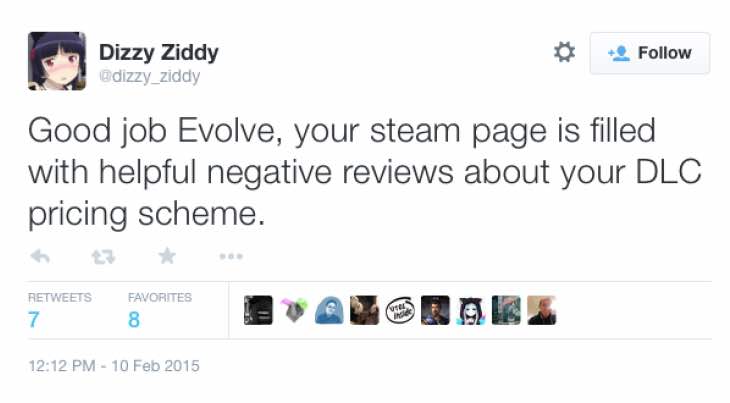 That’s not how it works in today’s industry though. You can’t pick up a fighting game and expect to unlock brand new characters simply by completing the game multiple times anymore – you’ll have to buy them.

It’s the same concept for a lot of games these days and now some are accusing Evolve of ‘falling into a dangerous trap’. We’ve added a video below which talks about some of the problems that Evolve may be responsible for and it should explain the reasons why gamers are leaving 0 scores on places like Metacritic and the Steam store.

Did you buy Evolve day one? If so, tell us what you think of the DLC structure in the game – are you happy to pay for everything extra or not?

Gamers like things for free, but is this one case where the complaints are justified?