Hopefully by now, most of you will have already obtained your Evolve Alpha code on Xbox One. The game will be going live very soon, with most of you bracing yourself for the Evolve Alpha release time.

We know that the release time will be sometime today and now Major Nelson has teased gamers further by sending out a Tweet minutes ago telling gamers to prepare themselves.

If you still need a code, you may want to try your luck at the last minute – either by asking other players on Twtter for spare codes, or by heading to giveaway sources like this one. 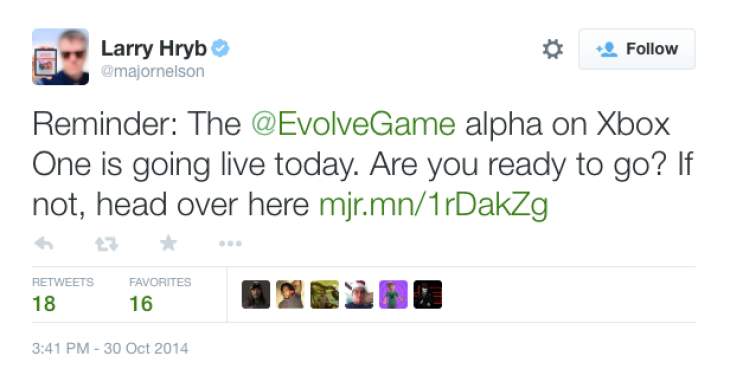 With so many high profile launches recently having problems, the only thing we are thinking of at the moment is whether the Evolve servers can handle every single Xbox One player jumping into the game at once – the last thing we want to report in several hours time is ‘Evolve servers down’ after all.

Remember if you are looking for the Evolve Alpha PS4 release time, you will have to wait until tomorrow as today is just for Xbox One gamers.

You can also get an Evolve Xbox One referral and registration code via the Xbox website here – hopefully 2K are still accepting late entries for those that have only just found out about the game and don’t want to be left out of the party either.

How excited are you about Evolve – do you have your code ready to play?