These days choosing the correct software platform for a device can be the difference between a successful launch and a huge flop, therefore the Evolve III Maestro can surely not go wrong as it runs three popular operating systems.

Engadget recently wrote a brief article about this tablet as they missed it during CES 2011, this tablet allows you to choose which operating system you would like to boot (Windows 7, Android or Meego), the 1.83GHz Atom N475 processor, 2GB of DDR3 RAM and solid-state disk ensures that performance will be good no matter which OS you are running. 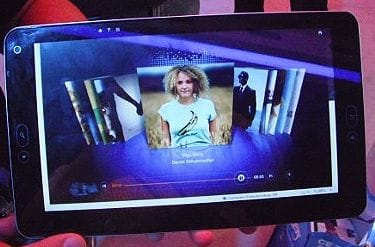 The rest of the specs are equally impressive, you get WiFi b/g/n, 3G connectivity, a 10.1-inch capacitive touchscreen display which supports a resolution of 1024 x 600 and 1 x USB port, also in the future a dual-core Oak Trail processor version will be released, exact dimensions are unknown, however we can confirm that it weighs less than two pounds and is roughly 13mm thick.

It is thought that the Atom-based version of the Evolve 3 Maestro tablet will retail for around $500, however the Oak Trail version will add roughly $100 to this price, below we have embedded a hands-on video showing off this device, I think you will agree that first impressions are very good and performance is almost unbelievable.

Developing a single device which runs three different operating systems has its pros and cons, obviously offering consumers the choice expands the tablet’s appeal, however in terms of software development it will undoubtedly be extremely time-consuming, I wonder if this may be its downfall.

As we hear more about this exciting device we will keep you posted, did you get some hands-on time with this tablet at CES 2011, was it as impressive as it looks in the video?