A Tetris like game which is highly addictive and fun has recently been released. Evil Bricks 1.0 is suitable for all ages and is available for owners of the iPhone, iPad, and iPod Touch.

Released by Portable Pixels the game is simple to learn but not so easy to master. Players have to swipe rows of colored bricks to change their positions. Once five bricks of the same color are lined up they explode, but straight away new bricks are spawned.

Some of these new bricks are Evil ones which can only be destroyed by a bomb brick. Players get more points if they destroy more bricks in one go, so they can see their points total rise fast. Other features include multiple game modes, classic, time attack, and timed. 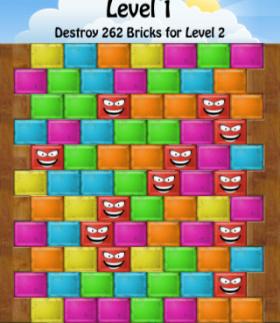