Following our report about Elder Scrolls Online possibly being delayed on PS4 and Xbox One, we can now confirm the new console versions will in fact have a release date 6 months later than first planned. Since the rumor this morning, Bethesda has sent out an email to Product Reviews explaining the reasons behind this decision and also an incentive to make console gamers feel a little better.

You can see the screenshot below of a FAQ page that leaked earlier today. While ESO is now delayed, the incentive being offered allows PC or Mac users to transfer their character to PS4 and Xbox One for just $20, which will mean you get to jump to either console for a reduced price. Along with this deal, you’ll get a digital version of the game on PS4/Xbox One along with 30 days of free game time as well. 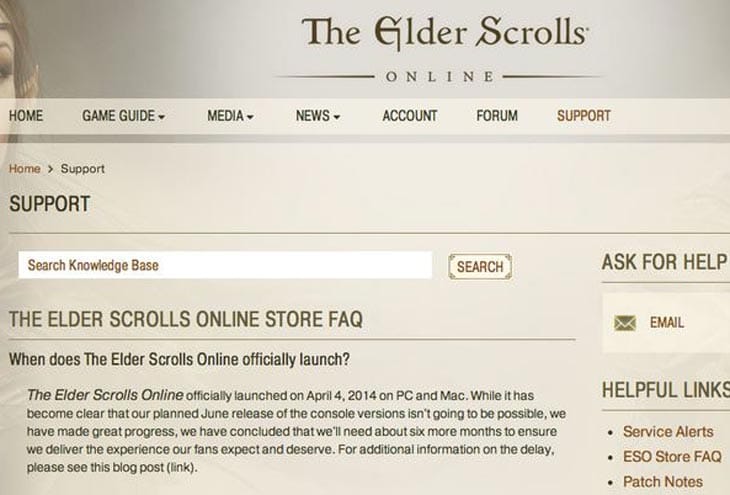 The statement released today explained how the developers are continuing to “work on the console versions”, and the ESO PS4 / Xbox One versions are “progressing steadily”. The reason for a delay is purely down to “unique ESO problems” on the Xbox One and PS4 platforms only.

Bethesda made it clear the Elder Scrolls Online release date set for June, “isn’t going to be possible”, and while they’ve made good progress another six months will be needed to achieve a level of quality that fans will want to see. It is also worth noting that Bethesda used the words “about six months”, so the ESO PS4 and Xbox One release could be longer or even shorter than that window.

Will you purchase the PC/Mac version, then jump over to Xbox One or PS4 when the game releases in around 6 months time? Do you think the $20 fee is worth it, or should the transfer be free considering the monthly subscription?

There will be an ESO Xbox One and PS4 beta and Bethesda promise to keep fans informed of a start date, offer dates, character transfer information, and of course the games development for consoles.