There’s a lot of excitement in the air right now in relation to the upcoming Elder Scrolls Online Dark Brotherhood DLC. Before that though, you need to be aware that all players will receive a free base game patch along with the content.

As a result, we can give you a good heads-up on the ESO Dark Brotherhood patch notes for PC, PS4 and Xbox One since they will apply to all players regardless of whether you have access to the DLC or not.

Without further ado, here is what PC and console players will see different in the game. The ESO Dark Brotherhood patch should be out on PC on May 31st, while PS4 and Xbox One will get access on June 14 – make a note of those dates! 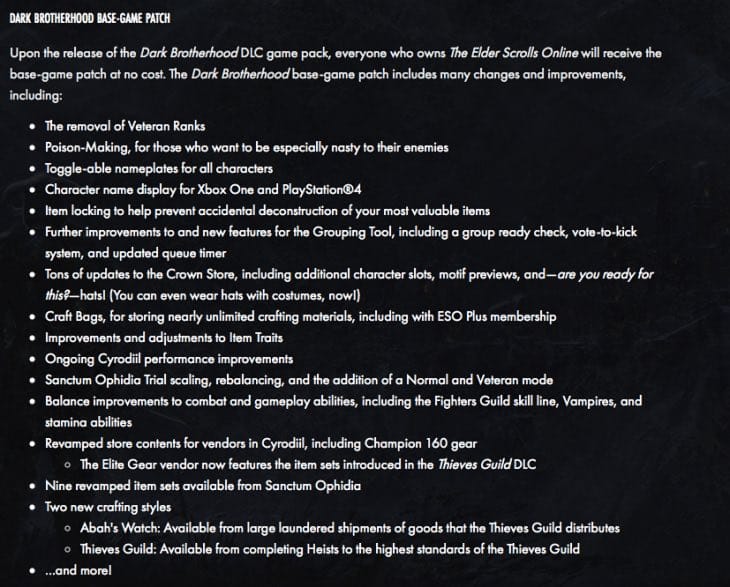 The patch notes for the Elder Scrolls Online Dark Brotherhood update are above, direct from the developers. It looks like this is still a preview at this point, but you’ll agree it’s a great heads up for players.

Expect nice changes such as poison making, a character name display on console and also revamped store contents for vendors in Cyrodiil – these will include Champion 160 gear.

Study the notes above and let us know your thoughts on the changes – has Zenimax missed anything out? Once again, all players will get this patch but tell us if you are buying the Dark Brotherhood DLC below!