I had never been interested in 3D TVs or projectors, but have had to change my opinion on both since now owning my own Samsung 3D LED TV and also spending a huge amount of time at a friend’s house with his 170-inch projector. I still remember the dilemma he had in choosing the right projector, but eventually settled on a Panasonic. However, if the new Epson HD 2D/3D 750HD projector, which will be released in March was on the market at the time I’m not sure he would have gone for it because it lacks one key feature, 1080p.

This will be a huge issue to some knowing that they only have 720p support, but when you consider the Epson 3LCD PowerLite Home Cinema 750HD price at $899, the affordability will be certain to allow you to forgive this one lacking feature. Some of the other features will be more than enough to keep consumers happy, such as 2D and 3D support, 3,000 lumens of color and white, and 120 inches and upwards viewing area. More of these specs can be viewed below or in this press release.

As you would expect Epson will be throwing in a pair of 3D glasses, which is said to last about 40 hours, but they do have a quick charge facility, which will offer another 3 hours of viewing time — ideal for a movie. 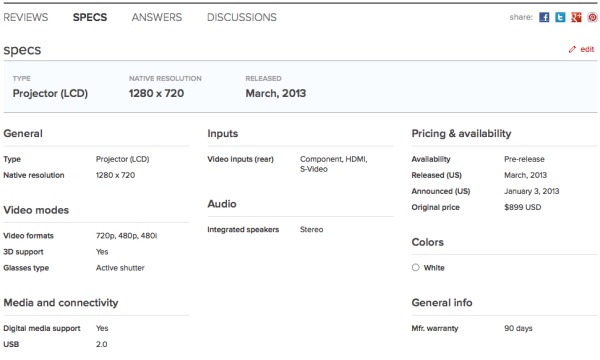 The 2D/3D EPSON Home Cinema 750HD will be released in March for just below $900 and will offer a two-year unlimited warranty. Do you believe that 720p is a joke and that Epson should have at least given the new 750HD 1080p support instead, or is it good enough when you consider the impressive price?