If you are looking for a bargain before the Black Friday 2011 sales kick off this year, then we have something which you may be interested in. As we told you previously, Walmart are starting their sales early, but one item that we didn’t discuss is a $98 Emerson 19-inch HDTV.

Yeah, you heard it correctly, just $98. You can always count on Walmart for some crazy deals and this TV is a good example of that. If you’re looking for a secondary TV for the kitchen, spare room or even your children then feast your eyes on Emerson’s LC190EM2 HDTV.

Is it part of Walmart’s Super Saturday Sales that kick off this week and it will only be available to buy until Nov 5th, when the deals will end. Main features of this TV include a 16:9 LCD panel with a 1366 x 768 resolution, a built-in digital tuner 800:1 dynamic contrast ratio, a eco button to save energy on brightness settings and thankfully, a single HDMI cable.

It means that you’ll still be able to enjoy crisp PS3 and Xbox 360 content on this $98 TV, so this really is a good deal to be had this week – you can bet that stocks are going to run out pretty quick once the bargain hunters take note of this offer. This TV is just one of many items available during Walmart’s Saturday sale, you can check out a slick visual guide over at Walmart’s Facebook App which lets you ‘quick view’ all of the items, some of which we already mentioned earlier on this week such as a Sanyo 42-inch TV, as well as a Vizio 42-inch LED TV.

There’s also some good gaming deals on offer, and plenty of other electronics that you can pick up for cheap. Head to Walmart’s Facebook page here to see the deals for yourself. Does this $98 TV from Emerson interest you or not? 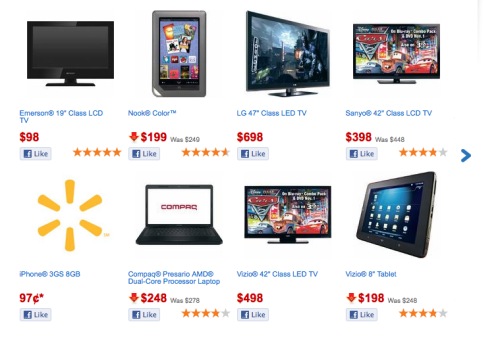