Earlier this week, we told you here that a new update was available for Android. However, we’ve noticed that once you have generated your video, sharing it on Facebook becomes a real problem. In fact, the app doesn’t appear to let you do this – or it will share but your friends cannot view your Elf Yourself video, which obviously defeats the whole objective of creating a video in the first place.

Just head to the Google Play store, to see that consumers are not happy about this. There’s also numerous complaints from users who believe that the Elf Yourself iOS app has received preferential treatment over Android. 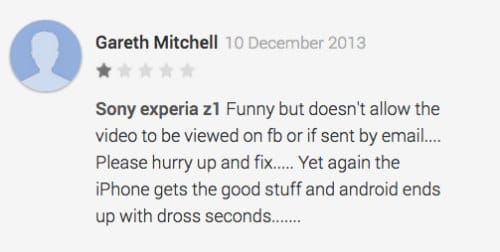 The biggest problem about the sharing, is that this hasn’t been made clear by the creators before asking users for a purchase. If you are using the Android version of the app, let us know your thoughts on the state of Elf Yourself on Android at the moment.

Are you having problems sharing to Facebook and getting your friends to view the video? Do you also believe that Android users have been given the ‘second rate’ app compared to iOS?