Whenever a new OLED TV is due for release we tend to make a big deal out of it, but once it has been released we often forget about it. Many of our readers often ask what about the models that have been on the market for some time, are they still popular, and do they now have a price that makes them more achievable to buy? Thankfully, this was never going to be an issue for the Element ELEFW408 TV, as stores like Walmart mark them up for a price that makes them very affordable to most consumers.

However, more often than not people are still unhappy and wait for an Element ELEFW408 TV price drop, and you can be certain that one will happen within the next few weeks. In the meantime we thought we would refresh your memory as to its specs, and see what owners think of the TV, as this is a great way to gauge if you should get on or not. 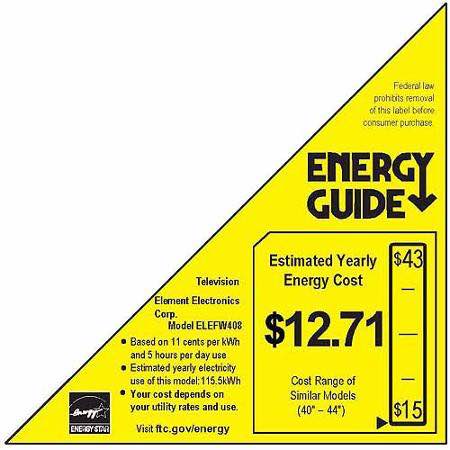 For those of you that are concerned with how much energy your consumer electronics use, we have included an image of the sticker that appears on the Element ELEFW408 above, and if you feel you are happy with the figures, then let’s take a look at the main specs and features, although they are going to be nothing like the Sony KDL48R470B HDTV that we looked at earlier.

Element ELEFW408 specs – This model comes with an LED panel size of 40 inches and a resolution of 1920 x 1080 and an aspect ratio of 16:9, a contract ratio of 4,000:1 and a brightness level of 200cd/m2. This is a Full HD 1080p TV with a refresh rate of 60Hz, so not ideal for some of the faster paced sports games. The ELEFW408 comes with a built-in tuner, 3 HDMI ports, although from the look of it lacks wireless connectivity, but with no Smart TV functions this was to be expected.

The Element ELEFW408 review score is a mixed bag, hence why owners have marked it somewhere in the middle. While most owners seem more than happy with the TV because it does what is asked of it, the picture quality is nothing fantastic, although its quality of sound is far grater than you would expect for a TV of this price.

We understand that some people have been looking for the Element ELEFW408 manual, but for some reason this is not available on the Element website.