Those looking to pick up a Element 55″ 4K LED Smart HDTV this month will be looking for information on the TV before purchase, as it is largely known that budget brand Element would usually shy away from offering 4K TV models.

However, with the Element 55-inch ELUFT551 4K Smart TV sold at retailers such as Target it appears that this year may be different and with more consumers switching over to 4K – Element has decided to tempt you with a massive TV combined with their trademark low prices.

However, is it really a 4K TV from Element though? We have taken an early look at the Element 55-inch 4K LED Smart HDTV and found that there is currently next to no ‘official’ information on it.

By this we mean that there are no Element 55″ 4K LED Smart HDTV reviews at all and the product is not even listed on the official Element Electronics website which is rather odd.

On Element’s support section we couldn’t find a listing for any 55-inch 4K model either, so those who have even bought one already couldn’t get support on it – let alone those looking to pick one up this month. 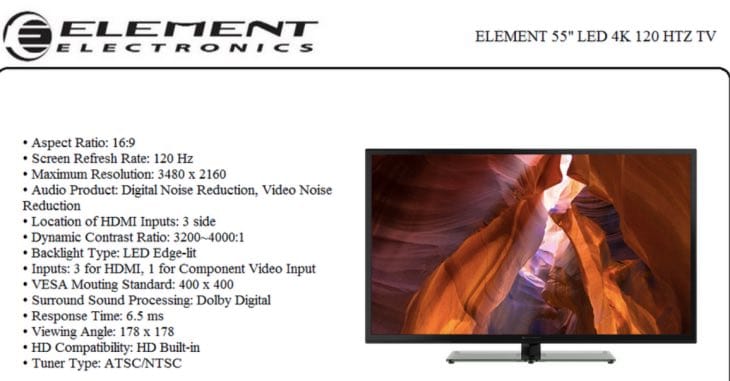 Digging deeper into this, we did find out some interesting information on message boards. Specifically here, which suggests that this Element 55-inch 4K LED TV, is actually the same TV as the Seiki 55″ 4K SE55UY04 – for which you can find reviews on over at Amazon here.

We have however managed to find the official Element 55″ 4K LED Smart HDTV specs list which we have included in an image above. It reveals a 120Hz refresh rate which is an important factor, plus 3 HDMI ports and a 4000:1 contrast ratio.

Are you worried about the fact that this model is missing from Element’s own website? Surely it should be there for 2014 buyers to check at any time, ahead of potential new buyers this year?

Let us know your thoughts on this model, which appears to be something of a mystery right now. Do you own one, or are thinking of buying one this month?

What is the best price that you have seen for it so far?