If you tuned into the Spike Video Game Awards over the weekend, you’ll know that one of the biggest announcements was the confirmation that a fifth Elder Scrolls game is on the way. We want to know your expectations of Skyrim, set to release next year.

At the moment, we don’t know what platforms the game will be coming to. PC will obviously be one, but PS3 and Xbox 360 owners will be anxiously waiting to see if they’ll be able to play the game too – fingers crossed.

In terms of storyline, Bethesda were again reluctant to give away any details, but we can tell you that the game is a direct sequel to Oblivion – which will obviously delight fans. Oblivion stands up there as one of the best games of all time in my opinion, and to hear that Bethesda’s Nick Breckon has just confirmed on Twitter that the game will release on a brand new game engine – well it just gets better and better doesn’t it?

The launch trailer for the game also revealed a solid release date – November 11th, 2011. You may be surprised to hear that the game will be coming so soon after Fallout: New Vegas, which suggests to us that the team has obviously been working on Skyrim for quite some time.

What are your expectations of Skyrim? It is going to be one hell of a task to topple Oblivion, and we’re definitely interested to see how they tie the storyline from ES:IV into Skyrim. Do you have any possible ideas to share on this? The markings on the wall during the trailer seemingly hints at the inclusion of dragons in the game, and the title Skyrim suggests that there might be some action taking place high above land. 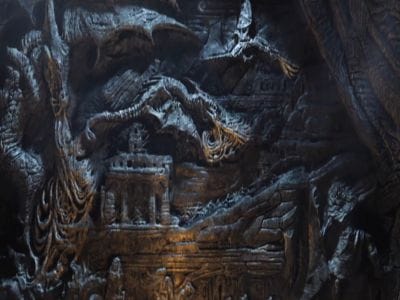 We can’t wait for further details on the game. It’s been a long time in the making, but we’re pleased to say that Elder Scrolls V is finally a reality. As a fan of the franchise, let us know your thoughts and expectations for the new game. Trailer is below.