At the start of the day, we informed you that Bethesda had started a countdown timer on one of their Elder Scroll V websites, in which they teased that the very first gameplay trailer would be coming soon.

Well, we’re pleased to say that the timer has now reached 0, and the first trailer is available to view over at the official website here. We must say that we had problems getting into the Elder Scrolls website, obviously due to fact that everyone else around the world is trying to do the exact same thing at the exact same moment – ah, you have to smile at a good old website crash don’t you?

As for the trailer – wow. We knew that Skyrim was going to be something special, and Bethesda certainly haven’t disappointed. There is plenty of gameplay action to see here – dragon slaying, landscape views, town environments, a wonderful flashback from Oblivion crossed my mind when I saw this. 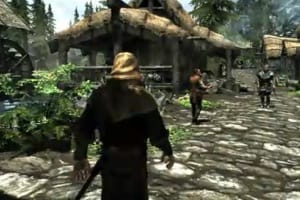 The trailer is accompanied by an epic soundtrack, with the same theme that most of you have probably heard online. The clip is just under 3 minutes in length and certainly leaves you wanting more. We’re praying that Bethesda has some sort of reveal planned for GDC which starts soon – they cant’ just leave us hanging until 11.11.11.

We’ve found the trailer on YouTube as well, so you can watch it below if you have trouble getting into the official site. Let us know your reaction to the gameplay, and your thoughts on the visuals. Obviously the graphics are nothing mindblowing, but it’s all about gameplay with Bethesda – and there are few in the business better than them.