With E3 2011 kicking off tomorrow there are lots of games which we are looking forward to seeing, one of which is Elder Scrolls V Skyrim, this game has been attracting lots of media interest and we think it will be one of the most popular games shown at the expo.

Recently we have posted details regarding the game’s 100% completion time and also some previously unknown Skyrim info, today we will look into the massive hype surrounding Elder Scrolls V.

If you join The Elder Council on Facebook you can get up-to-the date info regarding Bethesda‘s next installment, recently Bethesda’s VP of PR and marketing tweeted a photo which shows the Figueroa Hotel taken over by a huge Skyrim advertisement, we have embedded an image showing this massive ad at the end of this post.

The July issue of the official PlayStation Magazine is the source of a lot of the game’s leaked information, Skyrim dominates the front cover of this issue of the popular mag, it clearly states that Elder Scrolls V Skyrim is bigger and better than Oblivion, this statement cannot be taken lightly as Obvlivion is still regarded as one of the best 360 RPGs to date and was by no means short (in terms of its campaign).

We just can’t wait to see Skyrim in action at E3, can you? 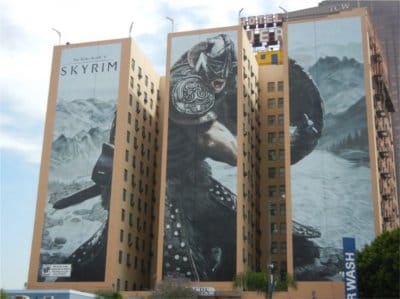