If you are excited about the upcoming release of Elder Scrolls V Skyrim, we have some news for you which will certainly interest you as we move within three months until the highly anticipated launch of Skyrim on the PC, PS3 and Xbox 360 come November 11th.

As big fans of Skyrim ourselves, we noticed some interesting developments that are currently ongoing on the official Elder Scrolls Facebook page. It turns out that Bethesda are turning to you, the fans in order to help them create a character from the game and by participating in their polls on the Facebook page, you’ll have a chance to get an early sneak peek at how the chosen class looks in Skyrim.

As most of you will be aware, choosing your race is one of the most important aspects of an Elder Scrolls game so this is the perfect opportunity to see how your class character model will look like ahead of the game’s release in November. Below you’ll see a screenshot of the types of race that are available for voting: 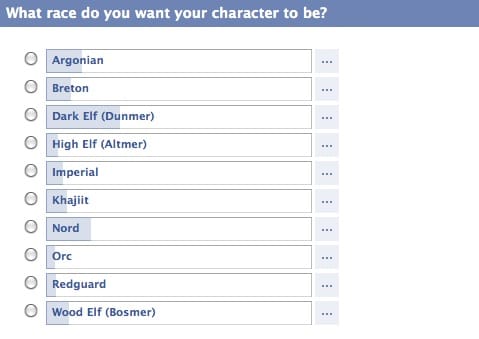 You can see that races such as Argonian, High Elf, Dark Elf, Orc and Khajiit are included, but what you can’t see is the results so far. We can tell you that the Dark Elf has powered into the lead with over 6,000 votes, so it is looking likely that he will be the character you’ll see when Bethesda reveals a screenshot of the chosen character later on this week. Further votes are also available to determine if the character will be a Thief, Mage or Warrior – so far the Thief category is a strong favorite.

If you haven’t voted yet, simply head to the Elder Scrolls Facebook page here and cast your vote now. In the meantime, tell us which race you are intending to choose when you get Skyrim on November 11th. I like the Wood Elf personally, but you probably have other ideas.