We have some really exciting news now for those of you that are waiting for the much-anticipated role-playing game The Elder Scrolls V: Skyrim to be released later this year, as we’ve just heard that Bethesda has recently revealed a limited Collector’s Edition. Although the Collector’s Edition will be available in PC, Xbox 360 and PS3 versions, stocks will be extremely limited.

As CM Boots-Faubert over on the gamingupdate.com website recently noted, the limited Collector’s Edition of The Elder Scrolls V: Skyrim is available to pre-order now through participating retailers in Australia, North America and Europe. The CE includes a copy of the game, an Alduin Statue, The Making of The Elder Scrolls V: Skyrim DVD and The Art of Skyrim Official Art Book.

The Collector’s Edition statue — which stands at 12 inches tall and was modeled from actual in-game 3D digital files — is made of high quality PVC, and showcases Alduin perched on top of one of the game’s many dragon walls. Meanwhile, The Art of Skyrim Official Art Book contains more than 200 pages of full color illustrations, models and sketches.

Not only does the art book showcase the characters and the environments of The Elder Scrolls V: Skyrim, it also showcases the weaponry and creatures. Thanks to commentary from Bethesda Game Studios artists and a foreword by game director Todd Howard, readers can be guided through the iconic visual style of The Elder Scrolls game.

The Making of the Elder Scrolls V: Skyrim DVD includes exclusive behind-the-scenes footage, including interviews with members of the Bethesda Game Studios team as they provide a bit more insight into the gameplay, story, setting and the legacy of the Elder Scrolls. Bethesda’s VP of PR Pete Hines said that the company creates collector’s editions that they’d want to own. 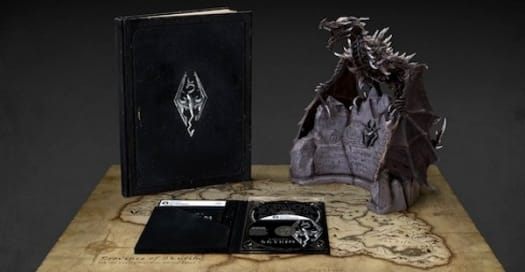