Another day, another bout of Elder Scrolls Online servers down for maintenance to tell you about. This time, TESO servers are down on PS4 and some are starting to ask the question on when the game has actually been playable for more than a day.

Perhaps this is an exaggeration a little, but the game does seem to have gone offline an awful lot since launch. There is a good reason for this particular outage as ZeniMax are now applying the same patch as what Xbox One owners received earlier this week.

Now it is PS4 users’ turn as TESO megaservers for NA and EU are not working on June 24 whilst the patch is being rolled out. 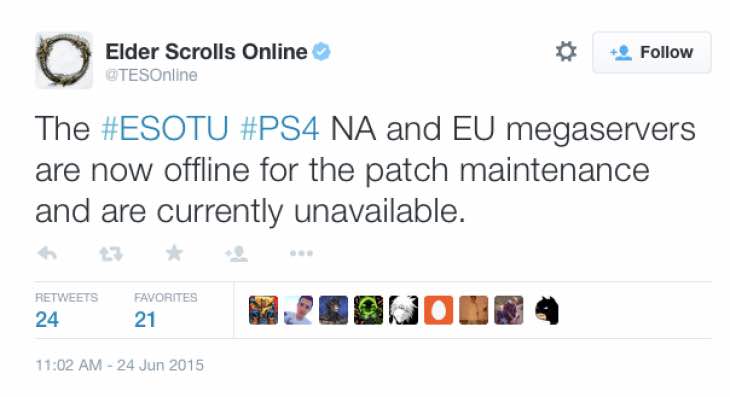 What is the most frustrating aspect for Europe players, is that it seems like the NA gamers are being prioritized – i.e, taking the servers down when US is asleep and making those in Europe who are ready to play suffer.

Still, Zenimax can’t please everyone it’s just a shame that these patches can’t be applied in the background so these long outages can be avoided, or at least shortened.

Are you fed up with the Elder Scrolls Online servers going down a lot since launch? Let us know once you can play the game again on PS4 – we’ll let you know when the new TESO PS4 patch notes are available.