This is a reminder about Elder Scrolls Online maintenance today that will take servers down for PS4, Xbox One, PC and Mac. Some of the downtime had already been planned for last week, but was put back to June 29, 2015.

You will notice Elder Scrolls Online maintenance starting at 8AM EDT for PC/Mac in North America that will see the megaserver offline in preparation for patch 2.0.12. We also see the USA / European servers being taken down today for Elder Scrolls Online on PS4 and Xbox One at the same time, which is 10:30AM EDT and around 3:30PM in the UK. This outage will impact the consoles account system and login, so if you didn’t know before, then you will when you experience problems signing in. 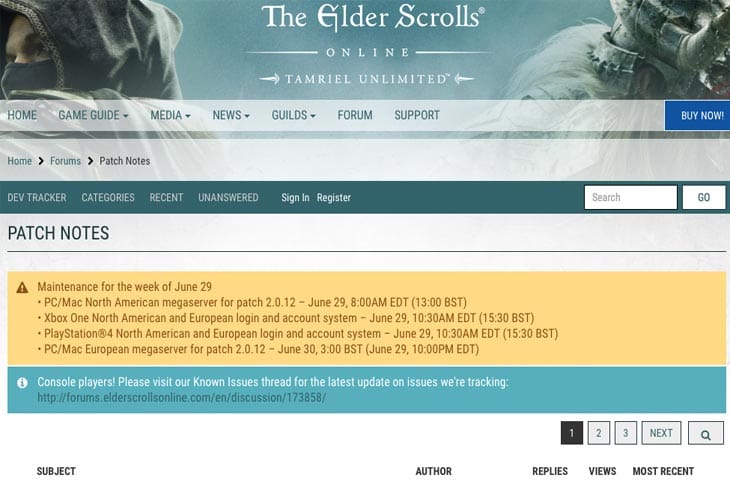 This weeks maintenance schedule continues on June 30, although only for ESO on PC and Mac. These players will see the European megaserver go down again for patch 2.0.12 at 3AM, UK time (BST).

Some players haven’t been happy with paying for ESO and seeing so much downtime, especially since the release of this multiplayer game on consoles. Let us know below how you feel about the amount of maintenance taking place each week and of course, if you are happy seeing the servers worked on this often?

You can leave your feedback on our ESO outage reporting hub, or below in the comments. We will update this article if there’s any changes to the above schedule. The official ESO server status page will also confirm when servers are down.