We have a quick heads-up to say that Elder Scrolls Online servers are down for maintenance on both PS4 and Xbox One on April 12, 2016.

As usual though, developers Zenimax Studios have not given gamers a heads-up on what time the TESO servers are back up today – which is obviously frustrating. 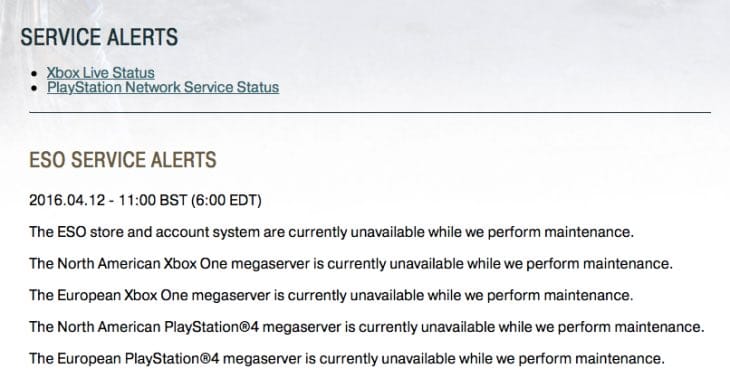 Above is the official confirmation that the megaservers are down for Elder Scrolls Online in both North America and Europe regions.

Those in the US won’t mind the maintenance occurring now of course as they’ll be asleep, but those in Euope will be annoyed that it happens at a bad time when they finally have a slot to get some gaming in.

Traditionally, the maintenance only tends to take a few hours, so hopefully you will all be able to get back in the game soon.

Are you in Europe right now and annoyed about the constant maintenance times which favor the US? Leave us a comment below.