The ASUS Eee Pad MeMO Me370T was considered by CNET as the best tablet of CES 2012, now we have discovered an accessory which will be compatible with all MeMO tablet models (to our knowledge) this is called the MeMIC.

The MeMIC looks a lot like a basic smartphone, the idea is that it communicates with your MeMO tablet via Bluetooth and allows you to make and receive phonecalls using this small accessory rather than holding the 7-inch tablet by the side of your face. One great thing is that you could keep the MeMO tablet in your bag and still be able to use the MeMIC as the communication between the two devices will remain established. Not only will you be able to use the MeMIC for phonecalls, but it will also be able to send and receive text messages as well as listen to music.

We’re not yet sure when the MeMIC will arrive and how much it will cost, however it did recently show up at the FCC, which suggests that it could arrive pretty soon. You can see all of the FCC documentation here, if the patent drawings are to scale we think that the MeMIC will measure in at roughly 4cm x 10 cm with a 1.6-inch display.

Below we have embedded a photo which we found over at TalkAndroid, as you can see there seems to be a back button, buttons to make and end calls along with up, down, left and right arrows and a center button for selecting things – we’re not sure how you’re meant to send text messages using these! 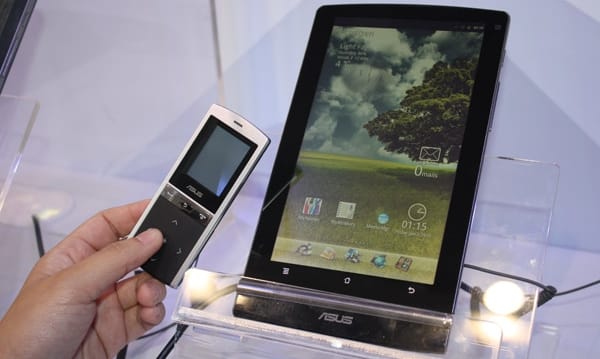 We think the MEMic sounds like a great idea and we wouldn’t be too surprised if other tablet manufacturers follow suit with similar accessories, let’s just hope pricing isn’t too high otherwise we think sales will be hampered. Would you buy an accessory like the MEMic for your tablet?