In 11 days time it will be Halloween, and some of you would have already been planning what costume it is you will be wearing on your night out, but each year there always seems to be a new trend, although the latest one has started a viral debate. That’s right, we can only be talking about the controversial Ebola Halloween costume.

The description of the Ebola Containment Suit Costume explains that the Ebola virus has taken hold of the United States and as such the public has reached crisis point. However, in a way to prepare most US citizens will need to wear this suit, well for Halloween anyway. We can see there is set to be a theme for this year, but is it all done in good fun, or is it in sick taste? 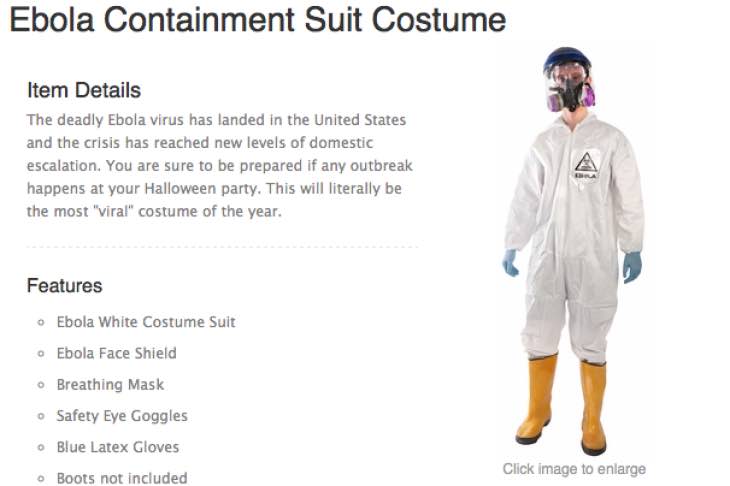 We knew from the moment we saw this costume appear on this popular Halloween costume website that it would create a divided opinion because while some people would argue that it is in poor taste due to the people becoming sick and dying, others would say the annual flu will actually kill more people in America, and so people need to lighten up.

It is understandable there will be two sides to this argument, one that we would rather stay out of, especially when there has been a large reaction on social media channels. Even someone we knew said that it seems strange how people have moaned that the Ebola Halloween costume is in bad taste, yet it is ok for people to wear costumes with blood all over it and a knife in one hand and the decapitated head of a women on the other.

How about a child who walks around with a zombie mask with cuts and bruises all over it, how is that message it puts across to children any different to an Ebola costume?

Where do you stand in this debate, do you think it is just a bit of fun, or should we not joke about a virus like this when it is not yet under control?