Whenever a new game trailer shows its face, like the GTA 5 trailer, you can almost certainly expect fans to look for Easter eggs hidden to create hype about a launch, and the same can be said for the tech industry as well. One of the biggest products launching within the next month is the iPad 3, and the invitations send out by Apple give a lot more away than some people might think.

One big change for current and future Apple devices – You can see a close up on the iPad 3 event invitation above and as you can see there is no home button, which would be a massive change for any new Apple device and the lack of this button could hint towards a change for iPhone 5 as well. We’d like to point out that the iPad could’ve been in landscape mode but there are theories that contradict this, although Apple love to send fans in all directions to throw rumors off any sent of reality, which could include the invitation spending time in Photoshop to alter how the final 3rd generation iPad would look.

If we imagine that Apple hasn’t altered the image in anyway to mislead us, then it could be seen that there really is no home button. We’d expect that the iPad in the invitation is really in portrait mode considering the landscape mode cuts off 6 drops in the background, and also app icons are too close to each other for landscape mode.

There has also been so much speculation over the icons in the image, which have been thoroughly detailed by this blog and what they see as the real reason for these icons in the iPad 3 event invitations. Have a read and let us know if you agree with them, or are they looking into this way too much and is it likely that the icons represent the keynote itself just as Apple normally do with past invites

The most popular iPad 3 rumors include Siri, 4G LTE, a faster processor, and retina display. The message in the image explains that we should be able to “see” and “touch” something, and this has led some people to believing there could be an Apple TV 3 at the event.

How would you feel if the iPhone 5 had no home button? If you’d like to share what other Easter eggs you believe are in the photo then please do so below, although we’d stand by the obvious that the iPad 3 will have no home button and would be the start of other devices, like the iPhone 5, having no home button as well. Remember that the lack of a home button also offers more space for a bigger display on a device of the same size.

Apple doesn’t have the backing of every news reporter and this cannot be more evident than seen in an article by the Guardian, which can be read here and focuses on Apple’s overwhelming dominance. Another article by Geek has looked at the different ways Apple could give fans “one more thing“, which includes no home button as we suggested but also 3D gestures, Aperture, Siri, iCloud gaming and more.

You can see an image below that Jeremy Schwartz created showing how the iPad 3 has to have no home button, or at least what Apple want us to believe thanks to the invitations, and would obviously become a standard for Apple devices if they start with the next iPad. 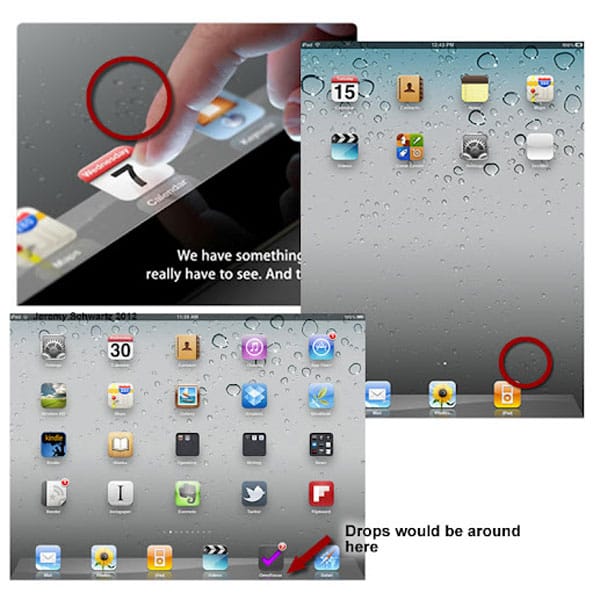