While we cannot confirm what just happened, it looks like an Earthquake just took place in Kent after many tweets and Facebook postings. In the last 30 minutes, at around 3AM UK time, a lot of east Kent felt what seemed like an Earthquake. See below article for map showing Epicenter for Kent, UK earthquake on May 22.

You can see the social media postings below that include people talking about what seems like an Earthquake in Margate, Broadstairs, Dover, Whitstable, Ramsgate, and other areas of the UK that would never normally experience an Earthquake.

In fact, we are hearing that parts of London also felt what seems like an Earthquake. This story is developing and we will update this page with more information, as it arrives. 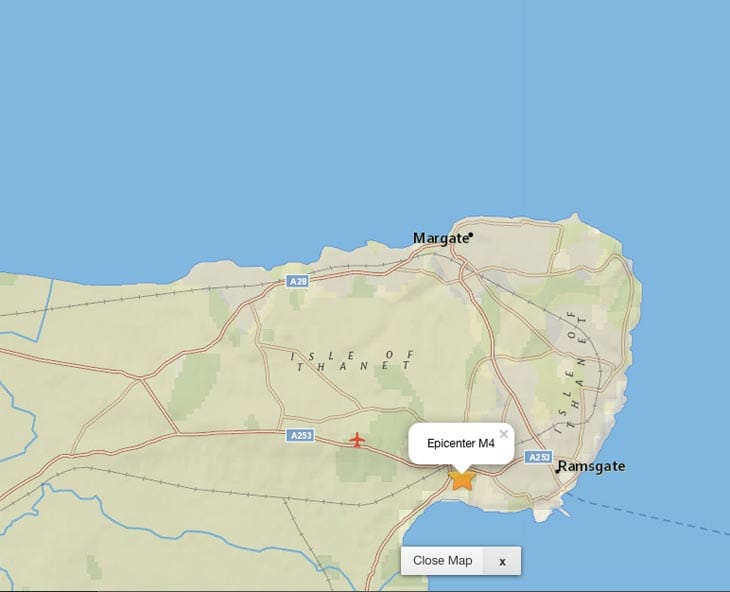 Did you feel the Earthquake in Kent and London on Friday May 22, 2015? Look below for updates from news media and our social media readers.

Map above shows the epicenter for Kent, UK earthquake on May 22.

Update 3, Aftershock tweets for Kent Earthquake: There’s an aftershock being reported by some in Kent, as seen on Twitter. One tweeter mentions, “Worst night sleep ever. Just been woken again! It felt worse this time #earthquake #kent”. Leave your comments below, if you felt an aftershock in Kent?