We now have the first details on what is coming to The Witcher 3 next, with regards to the Witcher 3 1.05 and 1.04 updates for PC and PS4, Xbox One respectively.

The developers are working on a brand new update for The Witcher 3 and will be releasing it on PC and consoles together – although obviously dependant on first party certification and approval before reaching consoles.

First up will be The Witcher 3 1.05 update for PC. This is going to include another list of bug fixes and we’re pleased to see that CD Projekt Red have already given us a heads-up on what to expect.

They include Geralt no longer interacting with candles near chests, a fix for players getting trapped in Turseach castle ruins and another bout of general performance and stability improvements. 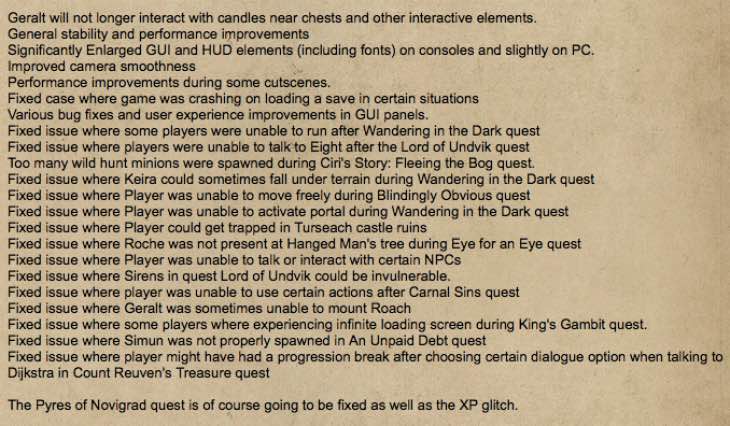 One of the main changes that we can see is an enlarged GUI and HUD elements, including fonts on consoles and slightly on PC – in other words those looking for a text size fix in The Witcher 3 will be getting it with the next update.

Remember, the notes you see above are not finished – just a partial list so far. The update on PS4 and Xbox One will arrive as 1.04, while the PC update will be 1.05.

We can also tell you that the console update should arrive within two weeks according to community lead Marcin Momot. That means that the PC update will be here much sooner as usual which is always nice.

Have they missed something which you are seeing wrong with the game at the moment?