It is finally time for GTA V players to enjoy the glorious GTA Online Heists release time one year after it originally was scheduled to come out.

The surprising news to bring you though, is it looks like some players are already seeing an early GTA Online Heists release time on PST, EST and GMT timezones.

Rockstar is not supposed to go live with the content until Tuesday March 10 as per with their own announcement, but confirmation has already been seen with screenshots showing that the GTA Online Heists content is live.

To give you evidence of this, take a look at the image below which reveals that the GTA Online Heists update size on Xbox One is 4.8GB. 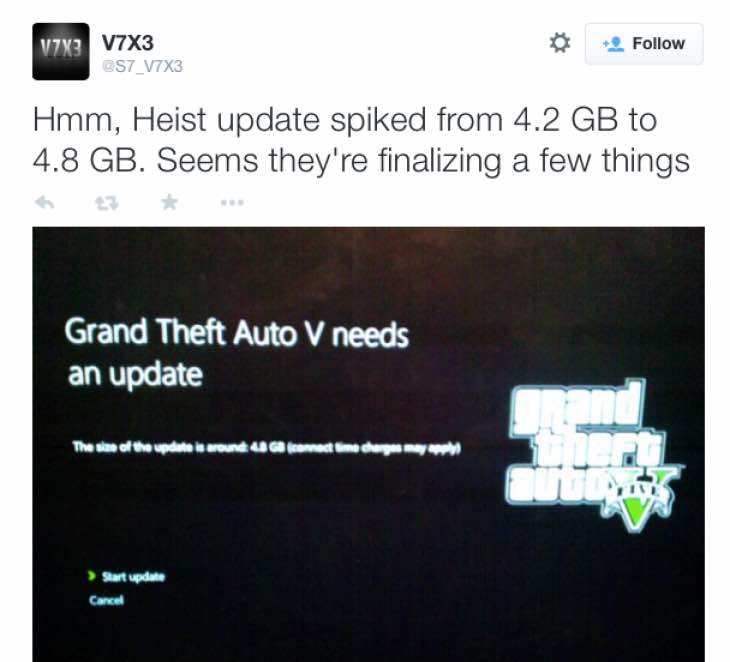 As you can see that shows that the Xbox One Heists is live for some players, but we’re not sure if the content has appeared early on PS4 or not – it certainly hasn’t for us, yet.

Meanwhile, there’s also whispers suggesting that Xbox 360 players can play Heists right now too and that the file is only 1.2GB in comparison.

Interesting for sure – but why can some players see Heists live before everyone else? Rockstar has not posted a set release time, but obviously look for the content Tuesday morning UK time and early in the hours US time based on previous update trends.

The question is – are you playing Heists right now on your platform? Do you know anyone who has also been prompted to install the 4.8GB update file early on Xbox One?