The official EA Sports FIFA on Twitter has confirmed they are working with Sony and Microsoft while the FIFA 15 FUT servers seem to be down today. As most of Product Reviews readers are aware by now, PSN and Xbox Live are under attack and have been offline for most of December 25.

Many developers are updating gamers directly on their official Twitter channels, so as expected, we see the same from EA Sports. While it might first look like EA’s servers are down, the fact is PS4, Xbox One, and older consoles are not able to connect or sign-in due to a DDOS directed at Sony/Microsoft. 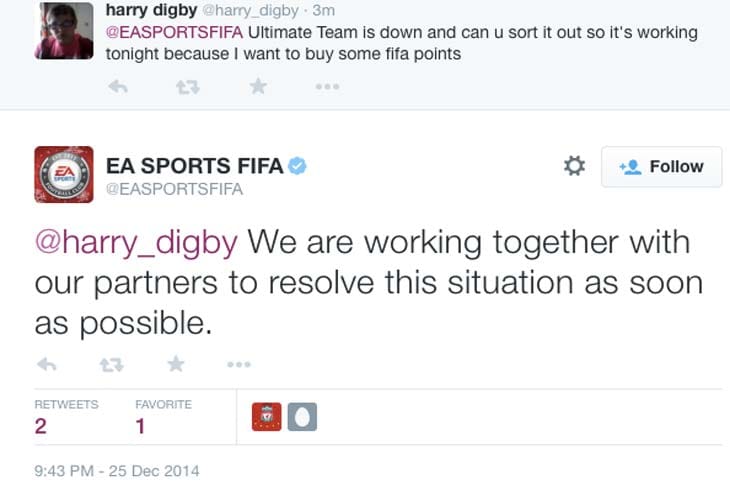 The latest Xbox Live and PSN Status update details services as offline, or “Core Services” being “Limited for Xbox One and 360 owners. This is the biggest outage we have seen in years and of course, it’s on one of the biggest days for online gaming.

You can see the said tweet left by EA Sports FIFA above, which basically answered a question from one FIFA 15 owner that wanted to know why “Ultimate Team is down”. EA made it clear they are “working together” with their “partners to resolve this situation as soon as possible”.

If you try to access most online areas of a PS4 and Xbox One, you will receive error codes. For example, NW-31456-9 is given when trying to see your friends list on PS4, but this is down and PSN is offline right now.

Have you been able to play FIFA 15 online on Dec 25, or any EA game for that matter?