The moment has come for UFC fans now, as we are happy to confirm that EA Sports UFC is now available to buy on PS4 and Xbox One. We now have some fantastic gameplay to show you, revealing a full match with the martial arts master himself, Bruce Lee.

If you don’t know yet, Bruce Lee is the surprise guest character for the game. What is better is that not only are EA making Lee as an instant unlock for those that pre-ordered the game, but you can also get Bruce Lee by completing career mode on either pro difficulty or higher.

To give you the perfect heads-up on the gameplay experience available in EA Sports UFC, watch the video which we have included below, showing Bruce Lee in a full complete match-up against Dominick Cruz. 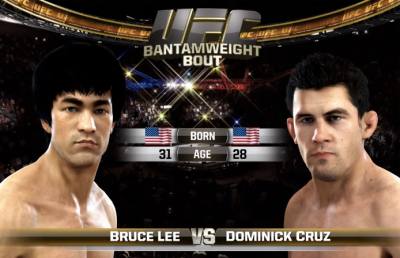 As we told you before, Bruce Lee will be available for selection in four different weight classes – these are Bantamweight, Featherweight, Lightweight and Welterweight.

This makes the legend very versatile indeed in terms of the UFC roster and it opens the game up to some tremendous match up potential. Many fans were fearing that Bruce Lee may be overpowered in the game and that everybody would be choosing him, but you’ll see from the gameplay below that this won’t be the case. 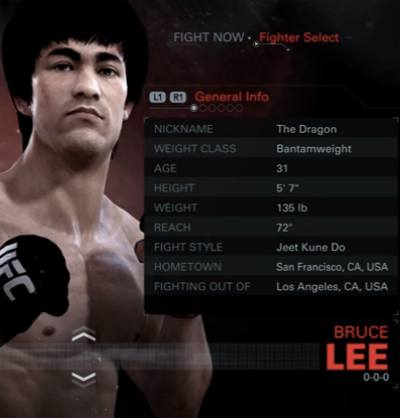 EA Sports UFC has been a long time in the making, but let us know if you have rushed out to buy it at launch and what your thoughts on the game are after playing it.

It’s also the first UFC game since the license was acquired by EA. Has EA done a good job on the game in your opinion? Who would your top picks be for EA Sports UFC DLC characters next?