We know that many developers and publishers are focusing on next-gen content to move ahead with the times, but we can see that there has been an ongoing problem with the PS3 version of FIFA 16 Ultimate Team – with many players complaining that they haven’t been able to play the mode for three weeks.

We have been keeping an eye on this issue ever since it first happened, but three weeks later we can see that there has been little response from EA on actually acknowledging it officially and providing a definitive timeframe on when the problems will be fixed for good.

At the same time, we can see that there has been no problems with the regular churn out of information from the EASportsTwitter page to its 3 million followers on Christmas Ads, celebrity tournaments and free Premier League ticket giveaways.

Should EA really be taking more care of their buying customers though? When speaking about the latest title update for PC hours ago, EA admitted that they are still restoring Ultimate Team access to some players after three weeks. 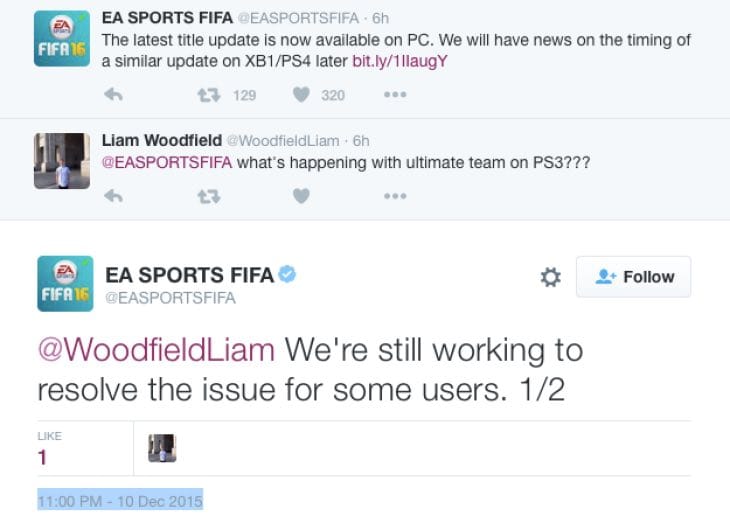 It seems to be a problem that has largely gone unnoticed, despite outcries on social media. One question to ponder: Would this still be a low priority issue if it was PS4 users who couldn’t connect to Ultimate Team, rather than last-gen users?

It is worth bringing up another discovery that we have made about the game in relation to lack of support. On December 8, EA performed three hour maintenance on the Ultimate Team servers and when they were restored we discovered that on our own account, our transfer list items had expired and couldn’t be resold or sent back to our club.

Our attempts to contact EA on this issue were met with somewhat amusing results on EA’s live chat service, with representatives having no idea on when the problem would be fixed and multiple representatives telling us that a ‘specialist’ was looking into it – standard protocol in other words.

Contacting EA’s own Community Manager Rob Hodson proved to be unsuccessful as well, while there was no support offered on the official forums for the game.

Going back to the main point, are you starting to feel a little uneasy when it comes to EA actually solving problems first hand when they occur?

If you have been having issues with PS3 Ultimate Team not working for three weeks, or experienced expired transfer list items which are stuck, get in touch with us below.