We have a quick heads-up to say that for anyone who is trying to sign into FIFA 16 Ultimate Team in-game or on the web app, you can’t as EA servers are down on FIFA 16 again.

This means that you can’t play any matches online right now, as EA has disable match creation on Ultimate Team. EA server maintenance on August 10, 2016 started at 7am UK time, with the servers due to be back up at 11am.

That is four hours of not being able to play and as usual, EA has not told players why the servers are down again. Let’s just hope that the servers will come back up at the advertised time, as we’ve seen in the past that maintenance can sometimes be extended. 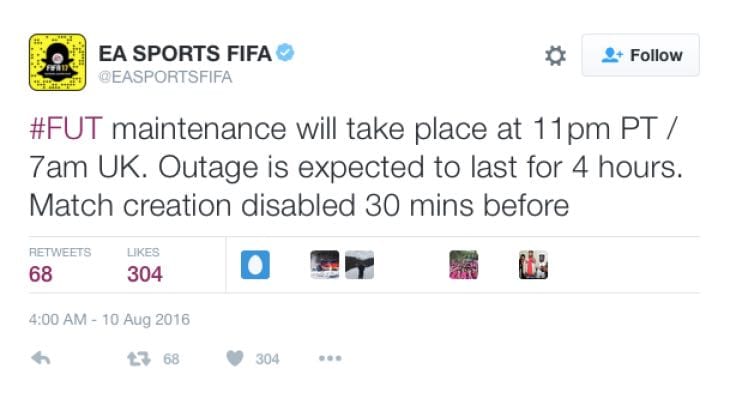 For many players, it will feel like the game is down every day, every week and more compensation packs need to be handed out. At least with other games, developers usually let players know why the servers are down but players won’t like the silence we feel.

Are you frustrated with this new four hour maintenance for FUT 16? Give us your thoughts below and don’t forget to keep track of the EA server status here.