On the eve of the Battlefield 1 launch, the last thing you want to see is EA servers down globally for all EA games on October 20. That is exactly what’s happening now and it means that FIFA 17 servers are down too and other popular games such as Need for Speed and Star Wars.

EA has already acknowledged the issues and their support team sent out the following Tweet warning gamers just minutes ago about intermittent problems today. 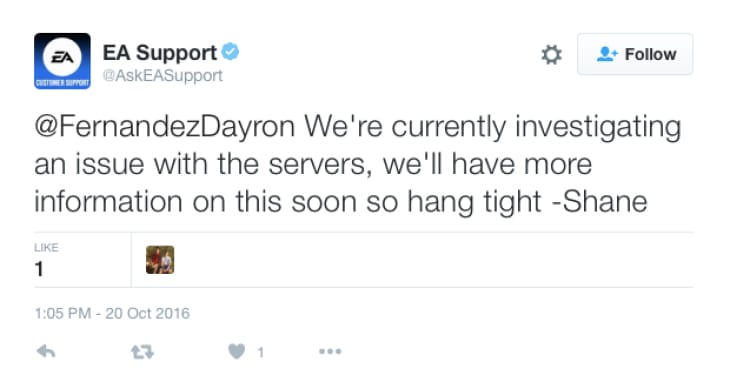 You should also be aware though that hacking group ‘Poodlecorp’ are also threatening to ruin the launch of Battlefield 1 by taking servers down on October 21 with a DDOS – this has happened before with nasty consequences for gamers.

In a week where we have also heard about Battlefield 1 servers being rented out for money, do EA need to spend more of their money to ensure that high profile games such as Battlefield 1 and FIFA 17 are always protected from attacks?

Hopefully the FUT 17 and BF1 server status will resume as normal today, but we’ll keep you updated with progress here. Let us know if you can’t play EA games today and your thoughts on more possible attempts by hackers to ruin the fun for everyone.