We can see that EA servers are down on December 24, with what looks to be a sudden issue with many EA games affected today. This includes FIFA 16 servers down and also what looks to be a Battlefield Hardline server outage as well.

We say sudden, as this has not been acknowledged by EA on the official FIFA 16 Twitter page which is strange since the majority of FIFA 16 maintenance is always reported there first to give players a heads-up.

At the time of writing though, there is nothing on the page yet so this is definitely not scheduled FIFA 16 server maintenance on December 24, otherwise known as Christmas Eve.

Given that Battlefield Hardline servers are down too today, it looks like it could be a serious issue and we just hope that EA are fixing it up as we speak. 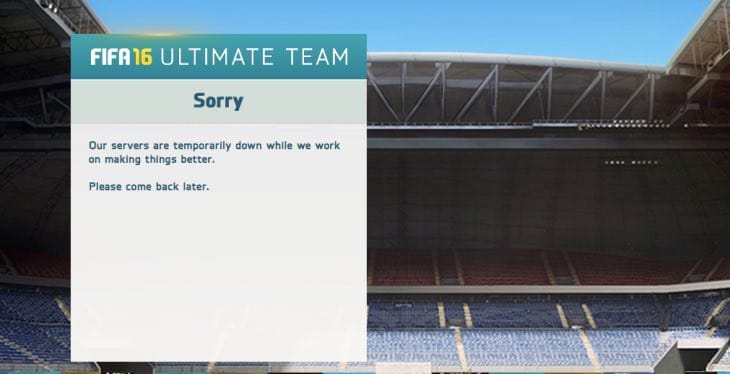 FIFA 16 players have some FUTMAS tournaments to play, coming off the back of a fantastic reward of two free Mega packs as a Christmas Eve treat.

We have been seeing some strange error messages with the FIFA 16 Web App down too, with the page sometimes asking us to create a new EA account.

Are FIFA 16 servers down on PS4 and Xbox One for you right now, as well as other EA games? We’ll provide the latest updates here but for now give us your status below with your platform and region.