The E3 2015 show schedule has been broken down by hours, planned times, and set over three days for this years event. Those going and watching online might want to know when different games will be discussed, so they are ready for the news in regard to games that count most to them by live E3 cam and while at the event.

You can see the E3 2015 day one schedule within a screenshot below that includes information for the GameSpot and Kinda Funny stage by time slot. As with last years lineup, there’s a few unannounced games set to be revealed at 1PM on the GameSpot stage, and more at 3:20PM and 4:20PM. 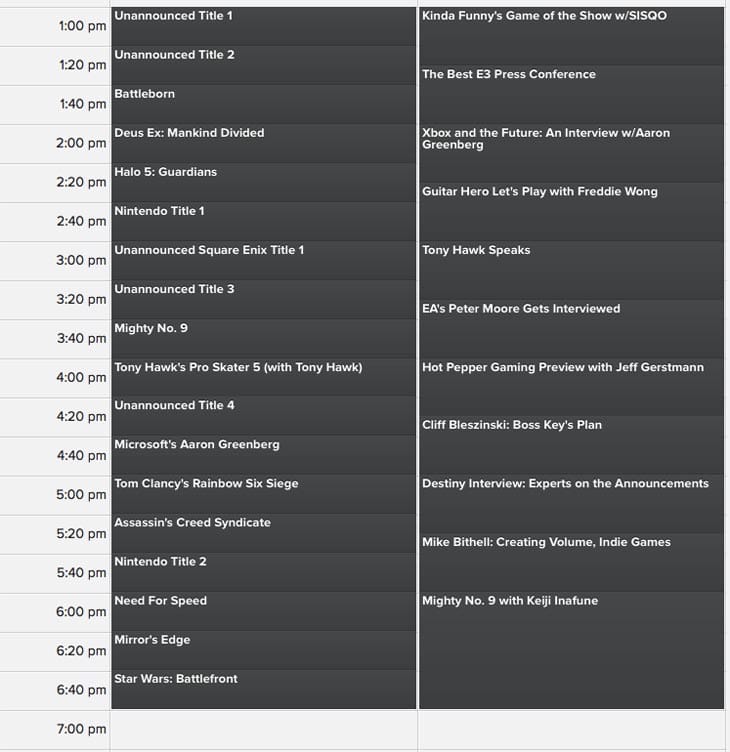 If you want to see the full E3 schedule with information for 2015, then see the above along with day 2 and 3 on this GameSpot page. This details the show times by hour for each day, so you can be well informed about the schedule before this years event starts.

There’s plenty to get excited about after day one, which includes details on Alienation, the Xbox One System Update demo, Disney Infinity 3.0 Edition, Fortnite, Tom Clancy’s The Division, Rise of the Tomb Raider, FIFA 16, Madden NFL 16, Just Cause 3, Forza Motorsport 6, and much more.

What games excite you most at E3 2015? There’s many other websites and apps that help gamers get ready for the event, which also include the official E3 app found on Apple App Store and Google play.