The E3 2011 live stream from GameSpot (which you can view here) still has over a day before it goes live, even though we know that there will be a few keynotes later today. Tomorrow is the day when we will all be able to see some of the hottest game news and demos. So to get you in the mood we have for you a schedule of events with all the dates and times.

By doing this you will be able to plan your day around them. First we would like to report that some users were a little annoyed with GameSpot’s live stream of E3 last year, as it ran 2 to 3 hours behind — lets just hope that we do not have a repeat of that. Just to let you know, Microsoft’s press conference starts in a little over 6 hours time.

Today we can see that 9 events are planned, with the first starting at 9:00AM PDT, which is E3 All Access Live Kickoff! We hope to see first footage of Ninja Gaiden 3 and Saints Row 3. At 9:30AM PDT there will be discussions for Gears of War 3, Forza 4 and a Kinect version of Star Wars. 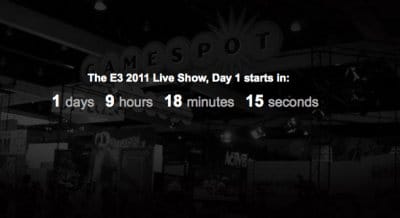 However live on Spike TV and GameTrailers.com will be news on Modern Warfare 3, Bioshock Infinite and Batman: Arkham City. At 5.00PM PDT will be the Sony’s E3 2011 Press Conference. This will be the most interesting one, as we expect them to talk a lot about all the recent issues they had with PSN. For a full rundown of the E3 2011 schedule for today then visit Gametrailers.

Which press conference are you looking forward to the most during E3 2011?