Recently we were sent a copy of Duke Nukem Forver to review, we were keen to test it out for ourselves as we were hearing lots of poor reviews from game critics, however we must admit after 2 hours of gameplay we have to agree that the game is lackluster to say the least. Today we will post some of our first impressions, however we will post a more detailed review for our readers to check out at a later date.

As soon as you load up Duke Nukem Forever you are reminded of the franchise’s over-the-top nature, obviously this is not a problem and quite frankly it is nice to load up a first-person shooter which wasn’t trying to be ultra-realistic or too serious, but once you start the game’s campaign you can see why the game is getting slated by critics. Obviously graphics aren’t everything, however it is not just the game’s visuals which dissapointed us early on.

Early on in the game you have to navigate through some corridors while a battle ensues, you see lots of soldiers and enemies, all of which have a white glow around them (see below) this does not help the game in terms of visual. Also we noticed that when the game autosaves it causes a very slight pause in gameplay, this is nitpicking, but something which doesn’t affect a lot of other games. Other things which failed to impress us include the obviously low frame rate, the poor animations which you see throughout when characters are moving and the fact that you smoothly glide when moving around. 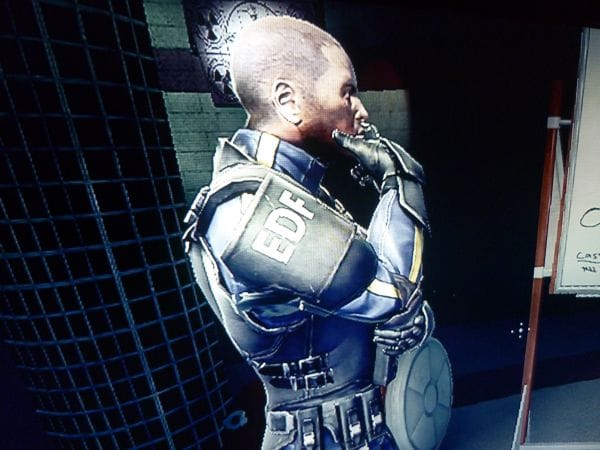 Early on in the game you have to battle it out with a Cycloid, this huge boss lacks any intelligence and is easily beaten, we had a little difficulty aiming so whacked the vertical and horizontal sensitivity to max, this helped a little but still we are not overly impressed by the game’s aiming system. Once you beat the Cycloid you learn that Nukem was just playing a video game whilst two women “attended to him”. For a few seconds we hoped that game’s visuals early on in the game were so poor due to the fact that you was in fact playing a game within a game, however this was not the case.

We then played through the game and we found that it was very linear and when you thought your detective skills would come in handy points of interest glow orange to show you the way, we think that it would be better if you had to work things out for yourself. At times we see glimpses of clever development and map design which makes you have to think about you are doing, one example of this happens early on when you need to find and item which is in a locked room, here you must use a remote control car to push the item through a gap in the wall, this was quite fun and mixed up the action for a while.

Now that we have had a few battles on Duke Nukem Forever we have to admit that it is not all bad ,but with game set to regular we have yet to be tested. Until we complete it we will hold our judgement and we will publish a fully detailed review when we do, so keep checking Product-Review.net for the latest news.